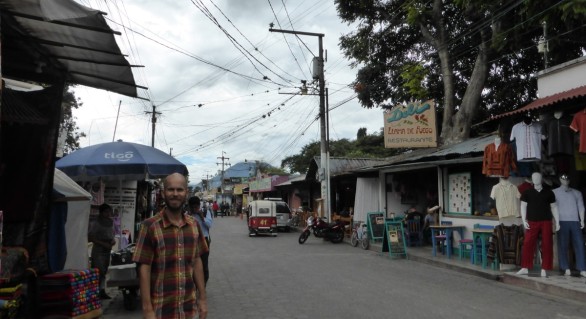 We spent over 3 weeks in Guatemala and during this time, had the opportunity to try a wide variety of foods and restaurants that satisfied our vegan requirements. The staple of rice and beans is nicely complemented by the ever-present corn tortillas. It’s impossible to walk down the street and not hear the pat-pat-pat of the tortilla dough being hand-shaped into 5-inch rounds or to smell the tortillas toasting on the cast iron griddles. The tortillas are made from many different corn varieties – white, yellow, blue, black and likely more! Delicious on their own or as part of a meal!

At our first stop in Flores, we were delighted to discover a full menu of vegetarian and vegan options at the restaurant inside Los Amigos hostel. We tried the tofu wrap, burrito, curry, falafel and salads, as well as the fruit smoothies. All were very tasty, and very reasonably priced for our backpackers’ budget. We decided to eat all of our meals here, as the food, prices and atmosphere were just right for us. They also have an awesome happy hour menu with great deals on all sorts of yummy cocktails and local beers. 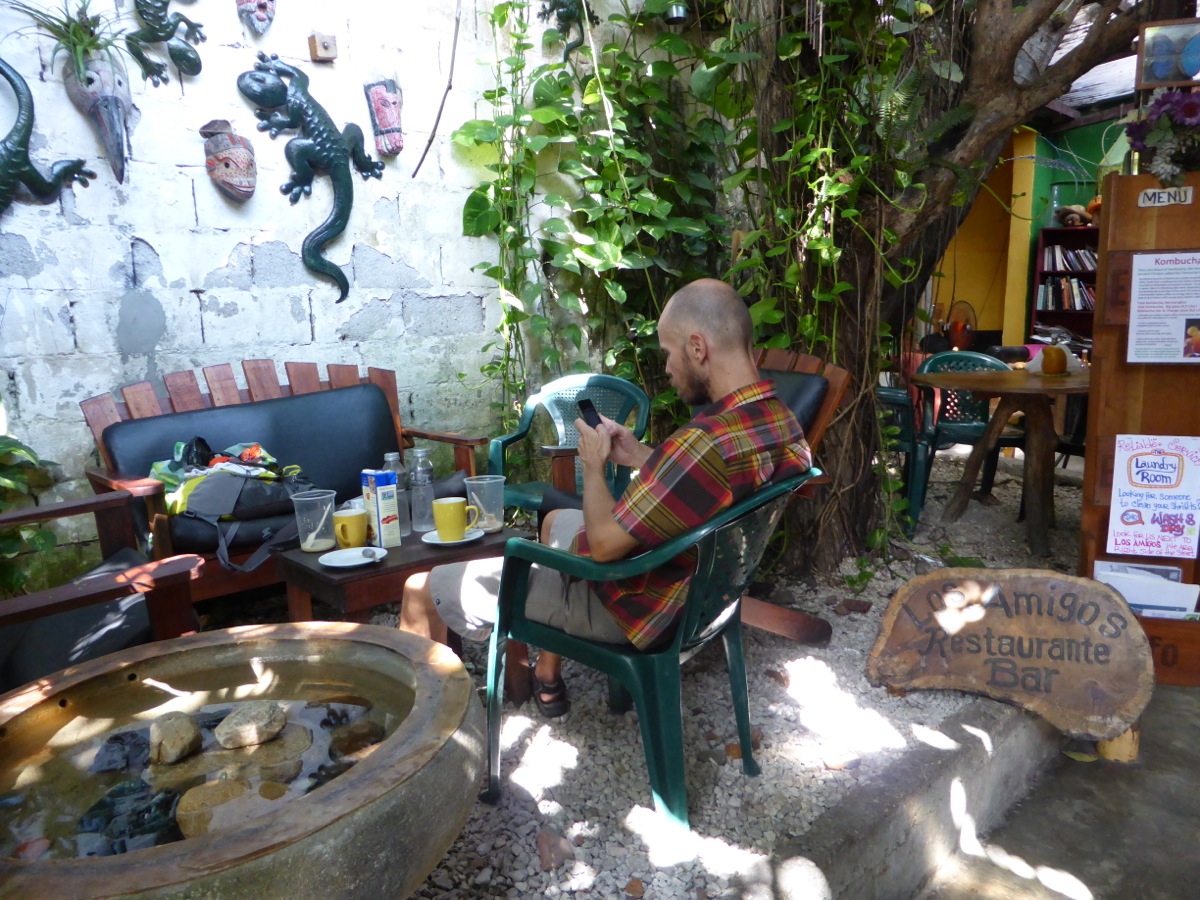 The city of Antigua provided a wide variety of options for us including well-stocked supermarkets and a large outdoor produce market. We had a kitchen at our accommodation, Holistico Hostal, so we were able to cook for ourselves most of the time – economical and healthy! We whipped up bean and veggie fillings for our delicious corn tortillas, hot off the griddle! We did enjoy two meals in local restaurants – a fresh and tasty quinoa and tofu wrap at Pitaya and a typical Guatemalan meal consisting of veggie-stuffed tostadas, guacamole, salsa and pickled cabbage at Sabe Rico. Both were on the pricier end of the scale, but were good quality meals. We were also able to temporarily return to banana heaven and enjoyed the use of the hostel’s blender, making a deep green spinach and 8-banana smoothie on two occasions! 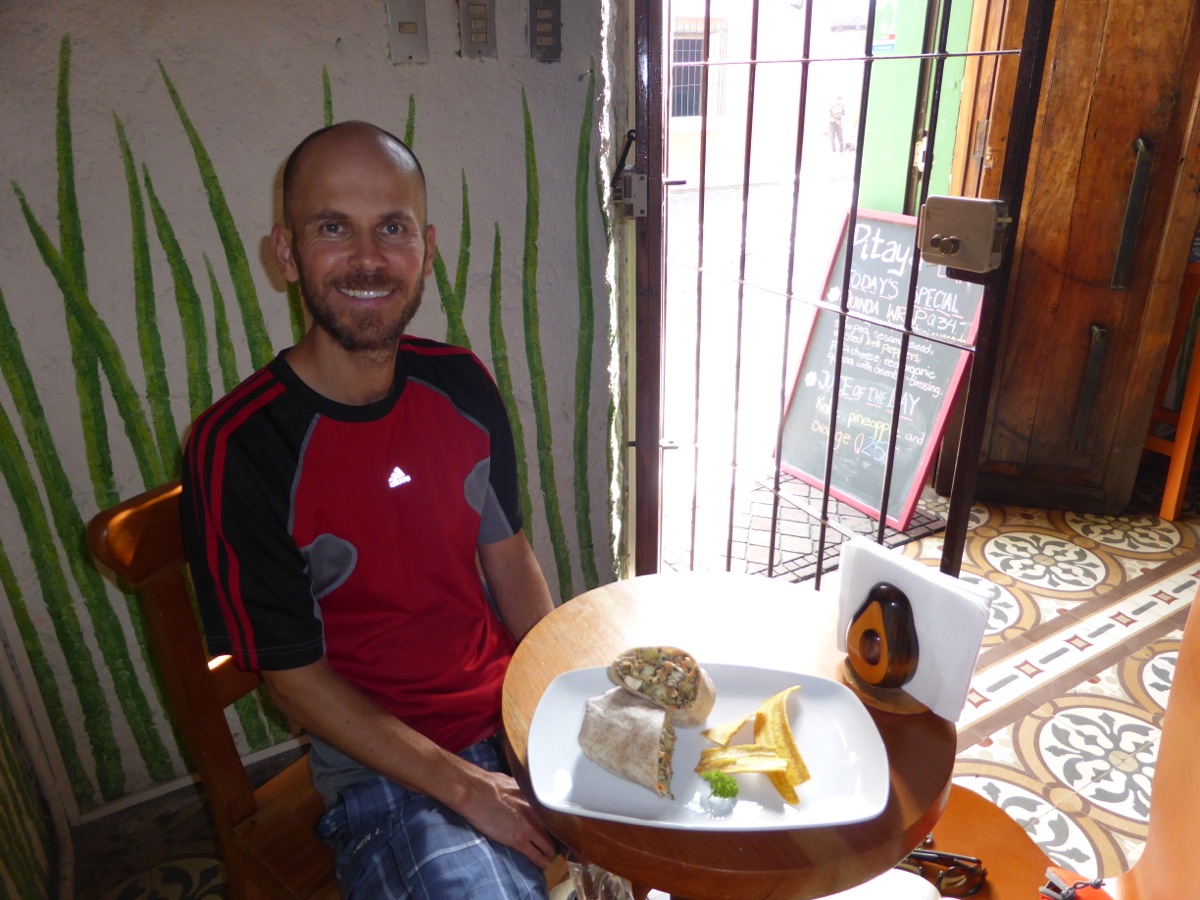 Lunch at Pitaya in Antigua 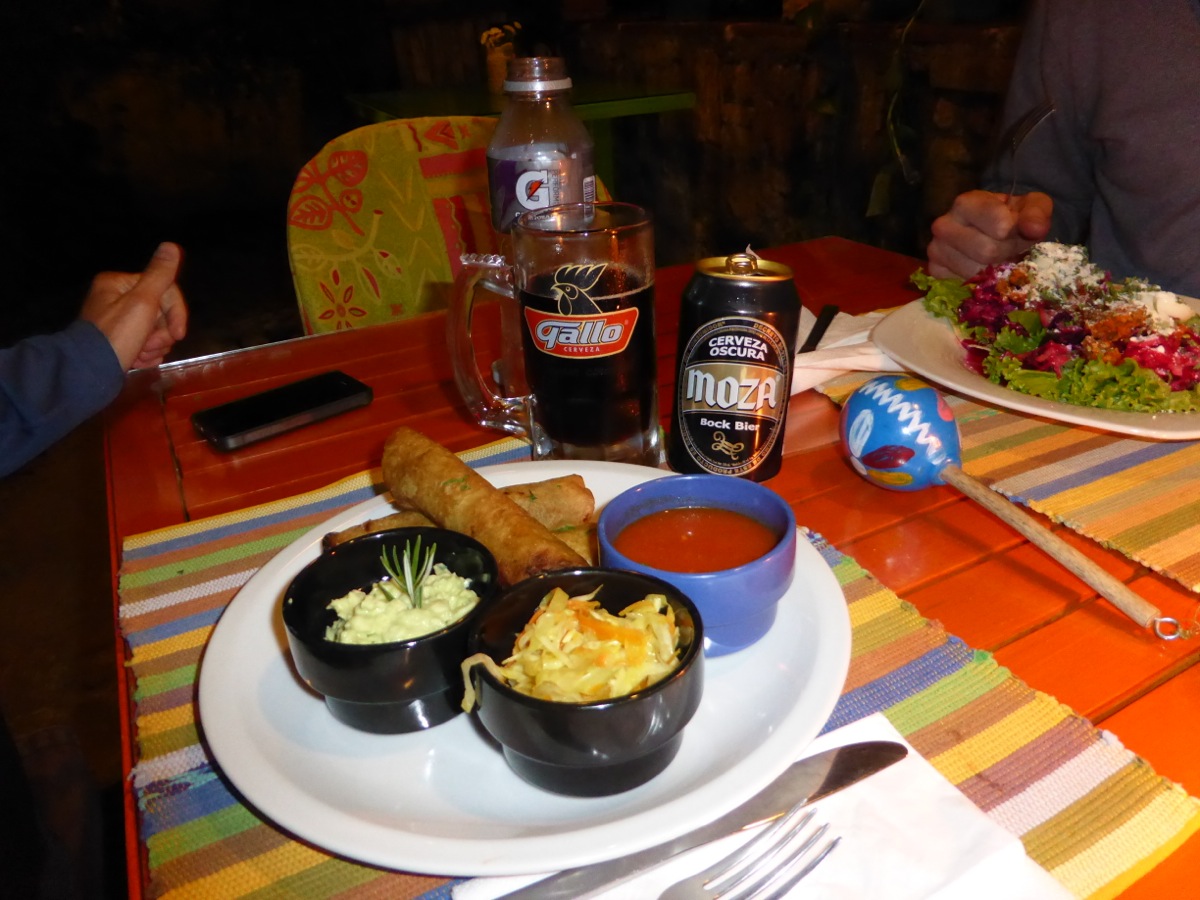 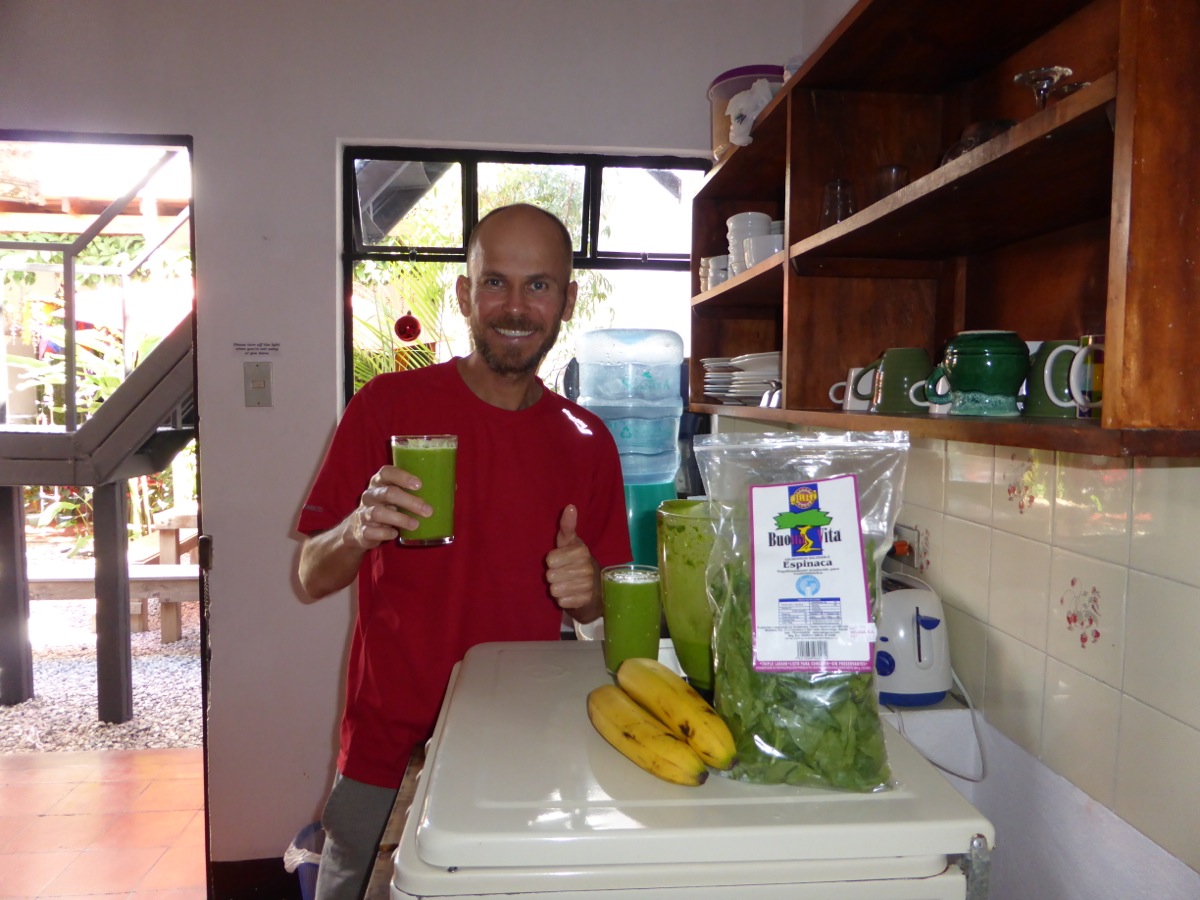 Return of the spinach-banana smoothie – oh, how we missed you!

The majority of our time in Gautemala was spent in Panajachel, a town on the shore of Lake Atitlan. Here we lived with a local Guatemalan family while we attended Spanish school for two weeks. We ate all of our meals with host-mom Magda, and she did an amazing job of catering to our (unusual) requirements. Breakfasts were fruit and cereal or oats, lunches included pasta, beans/rice, veggies, tortillas and bread, and dinners included soup, bread, tortillas, salad and veggies. We supplemented our meals with peanut butter sandwiches as snacks during lessons, and lots of fruit during the day. Our host-mom was very intrigued that we could not only survive, but thrive on our diet – especially since we ran a marathon while staying with her!

Panajachel has a fair number of restaurants offering vegan options, some even advertising vegan meals and treats on their window signage. Our culinary outings in Panajachel on Calle Santander included a wonderful smoothie/juice bar called Pitaya (not connected to the one in Antigua), a great little restaurant called Llama del Fuego with a multitude of tofu, tempeh and other vegan friendly options, vegan apple strudel from Cafe Kitsch, wood-fired pizza and delicious freshly made pupusas (bean stuffed corn pockets) with salsa from a street vendor. 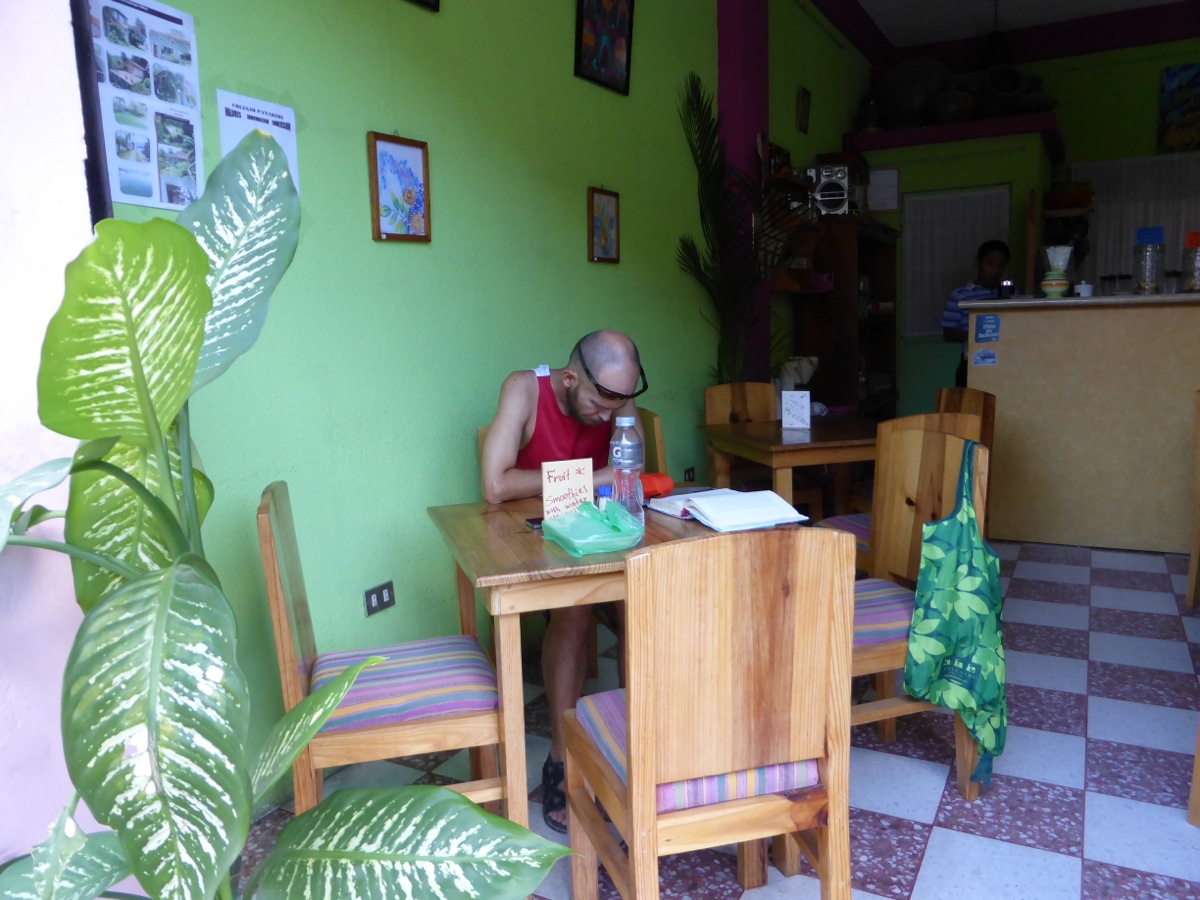 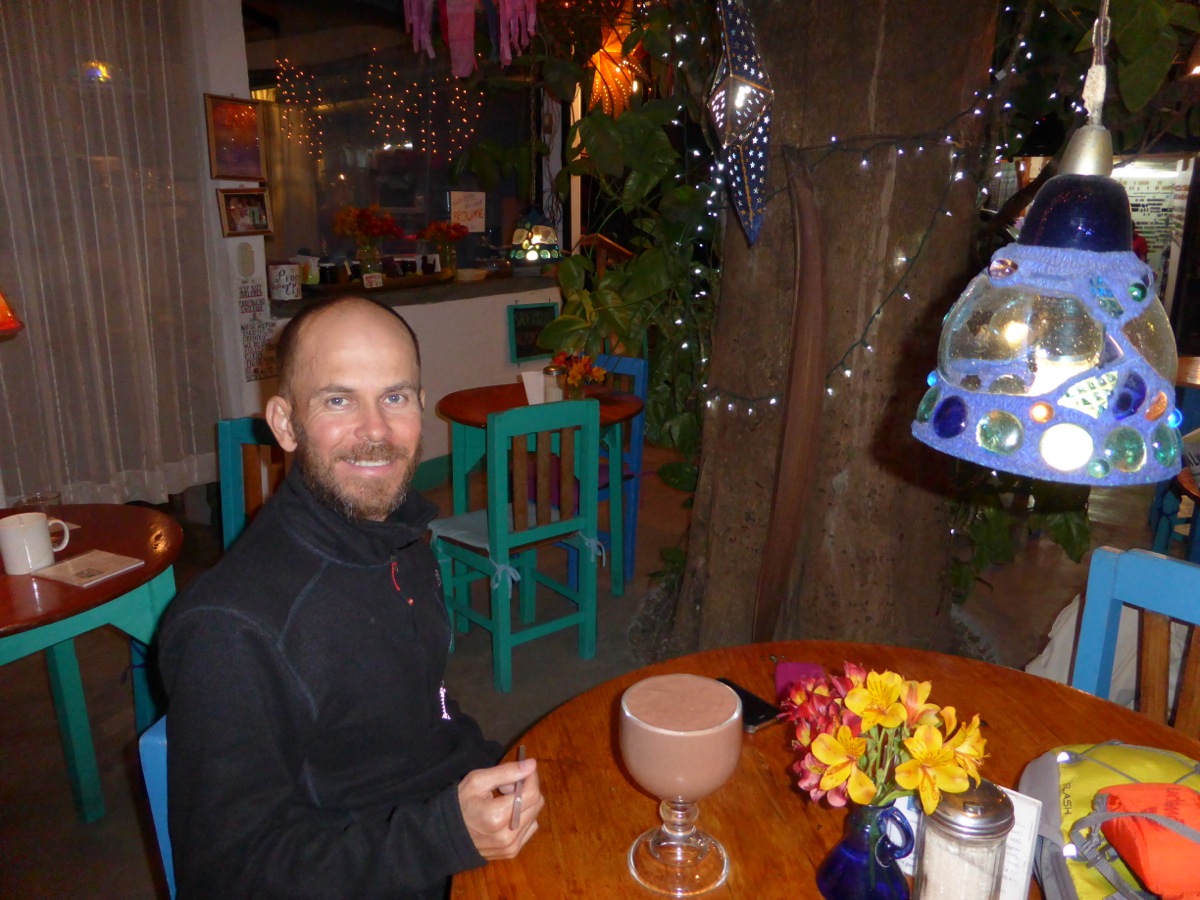 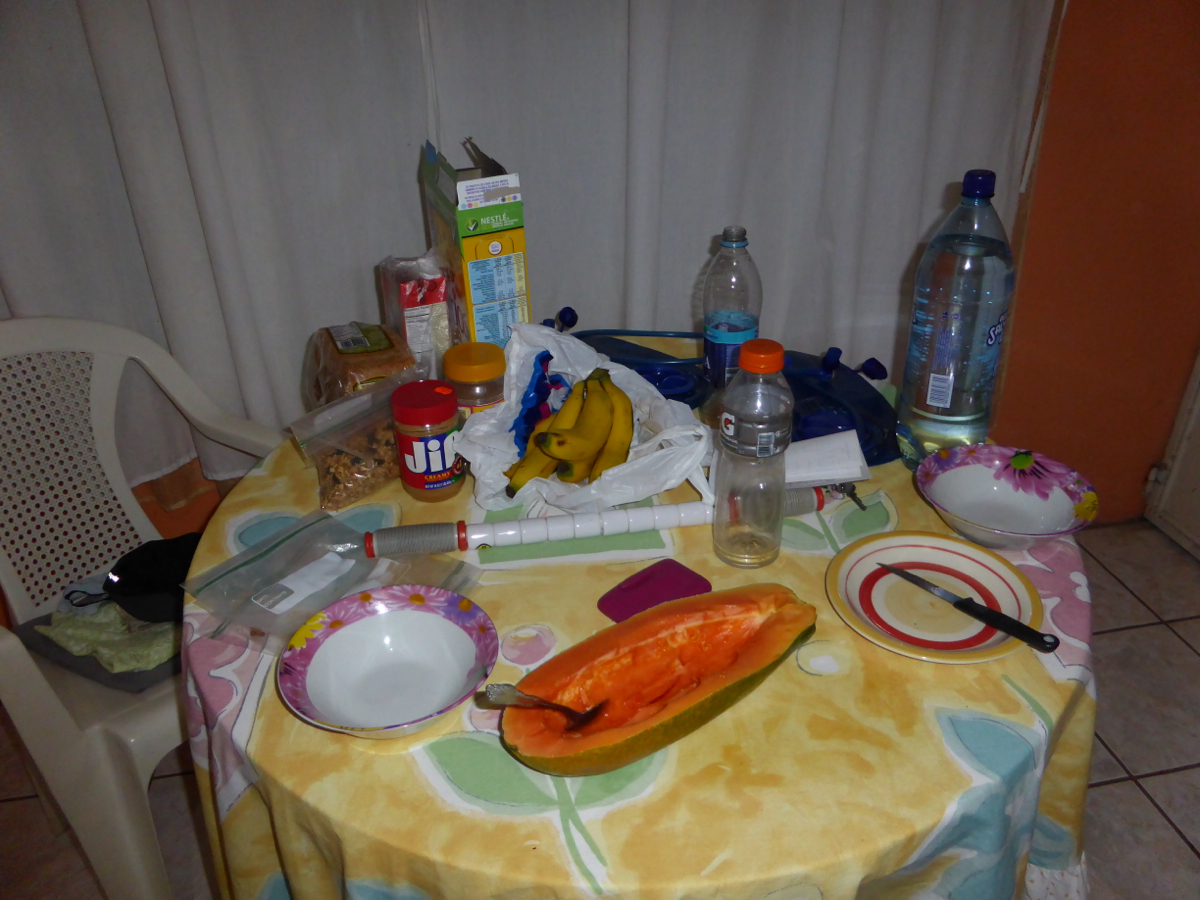 Snack time at our study table at Casa Magda! 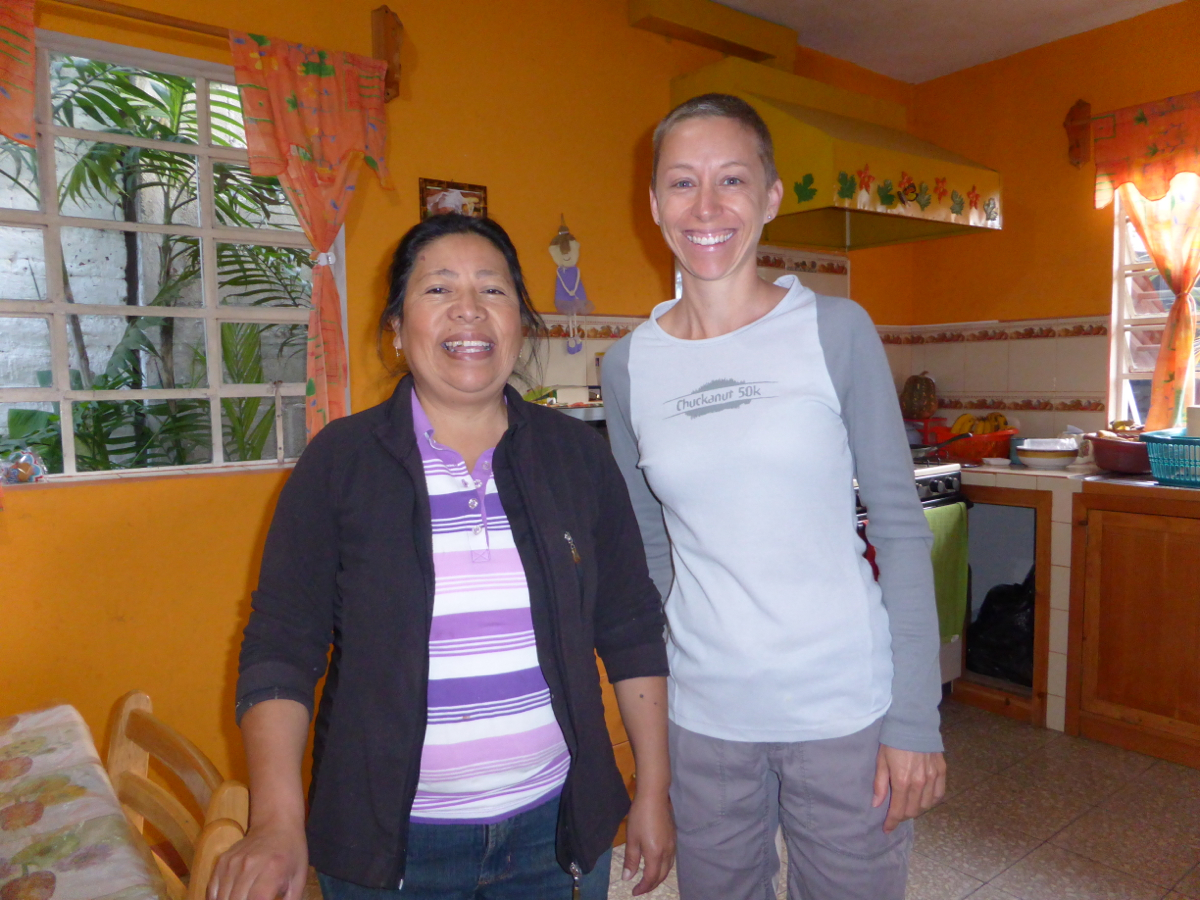 Bev with our host-mom, Magda, in the kitchen at Casa de Magda

During our time at Lake Atitlan we visited two other villages on the lake shore. San Pedro is the largest village after Panajachel, and is a bohemian oasis with a wide variety of vegan choices. We enjoyed a yummy veggie burger at the Irish pub (only one of the many nationalities represented here!), and made the mistake of only buying two delicious vegan choc-chip banana cookies from the natural foods market on the main street just up and to the left from the ferry dock. This market stocks a wide variety of local and imported foods that would happily support a plant-based diet, albeit at a hefty premium. The other village we visited was San Marcos, and it’s a little more hippy trippy than the other villages around the lake. We tried to find a few of the vegan outlets that we’d read about, but were unsuccessful in locating them – either due to closure for the season or poor directions. We were later told that they do exist by friends who visited the village!

In Guatemala we did feel a bit restricted with breakfast options in lodgings that included breakfast in the room rate. Most often breakfasts included bread, fruit, eggs, pancakes, juice and coffee. We usually opted for the fruit, bread and coffee, and then added our own granola, oats or cereal as we were able to. We did have pancakes on occasion once we’d confirmed that no dairy was used in the batter. It’s worth considering this when you’re travelling as a vegan, as the inclusion of breakfast is often not great value if you don’t take advantage of the full spread. Going forward, we may opt to ask for a reduction in rate in favour of an included breakfast. 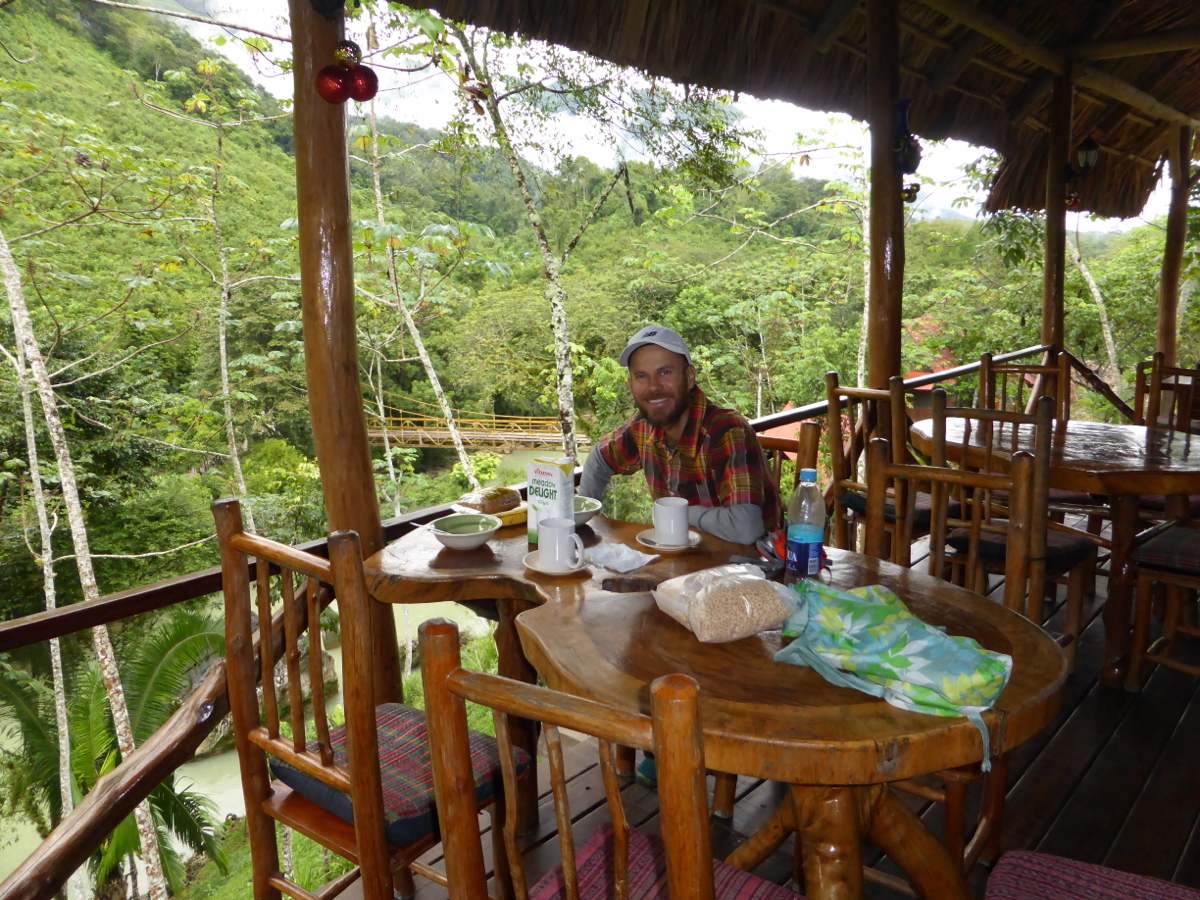 Finding staples like fruit, vegetables, soy milk, cereal and peanut butter was very easy in Guatemala and the supermarkets are very well stocked. Bread is in plentiful supply with bakeries or “panaderias” almost outnumbering the tortilla vendors! Be aware that the bread is usually made with white flour and is more cake-like than the crusty bread that you might expect if you’re from North America or Europe. You can also buy sandwich bread (wholegrain and wholewheat) in the supermarkets that are a little healthier although who knows what goes into that bread to keep it fresh! There are also many street vendors who sell cut fruit, fresh juice, pastries, breads, chips, candy and soft drinks. Similarly, there are vendors who board buses with all sorts of food items. Most of these were deep-fried items and definitely not vegan-friendly! Be sure to ask if the item is “sin carne o lactosa o huevos” if you’re intent on staying vegan!

Learning a bit of Spanish was very helpful to us when navigating meal times and shopping for groceries in Guatemala (and all the other Central American countries we’ve visited). It’s definitely a good idea to brush up on a few Spanish phrases and to learn the Spanish words for meat and dairy items. Most restaurants understood vegetarian, but very few understood vegan, so we were careful to describe as best we could in our limited Spanish what we did and didn’t want!

We picked up a batch of supplies as we moved through each major town and were never without an “emergency” source of calories! Aside from more secluded jungle locations like Semuc Champey or smaller villages across the countryside, we found it very easy to continue our plant-based diet in Guatemala in the locations that we found ourselves.

And last but not least – beverages! We enjoyed many wonderful cups of coffee in various spots across Guatemala. Our favourite place for a strong brew was undoubtedly Crossroads Cafe (notwithstanding the religious underpinnings!)  in Panajachel. Of course, we are now in the habit of taking our soy milk with us wherever we go as there is usually a great cup of coffee within arm’s reach! Favourite drinks in Guatemala included the deep, dark Moza beer (our favourite beer hands down on the trip so far) and the many delicious smoothies along the way made from the fresh and plentiful fruit supplies including papaya, mango, banana and pineapple. Be sure to ask if the smoothie bar has soy milk as cow’s milk and/or yogurt is commonly used to make smoothies. You can ask for purified water to be used if no soy milk is available (or bring your own, as we did!). 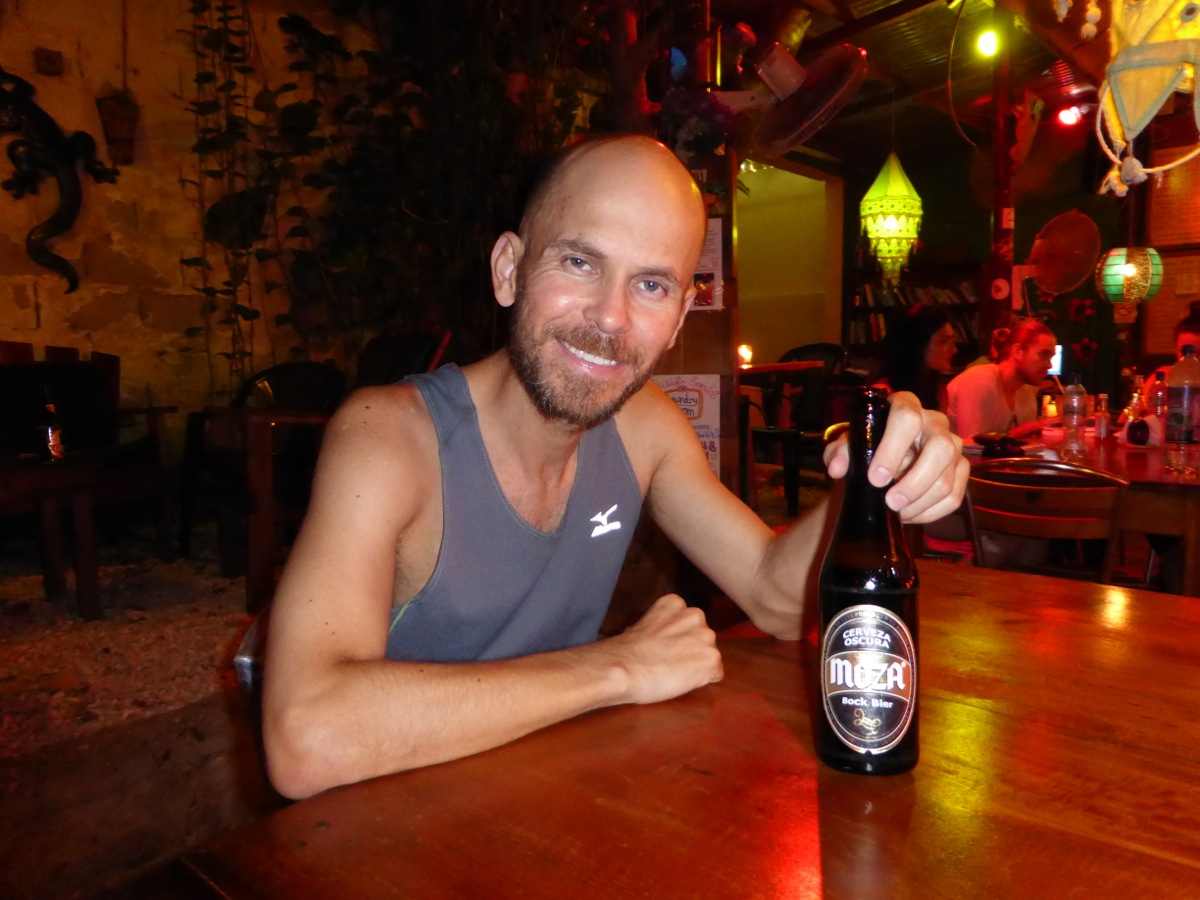 Most challenging food experience: Too much bread