After an interesting day of travel from Guatemala, we crossed the Honduran border at El Florido. Our entry into Honduras went without a hitch or bribe, and we breathed a sigh of relief! We negotiated a fare on a minibus taxi waiting at the border, and bundled in with eight locals for the short 10km ride into the town of Copan Ruinas. 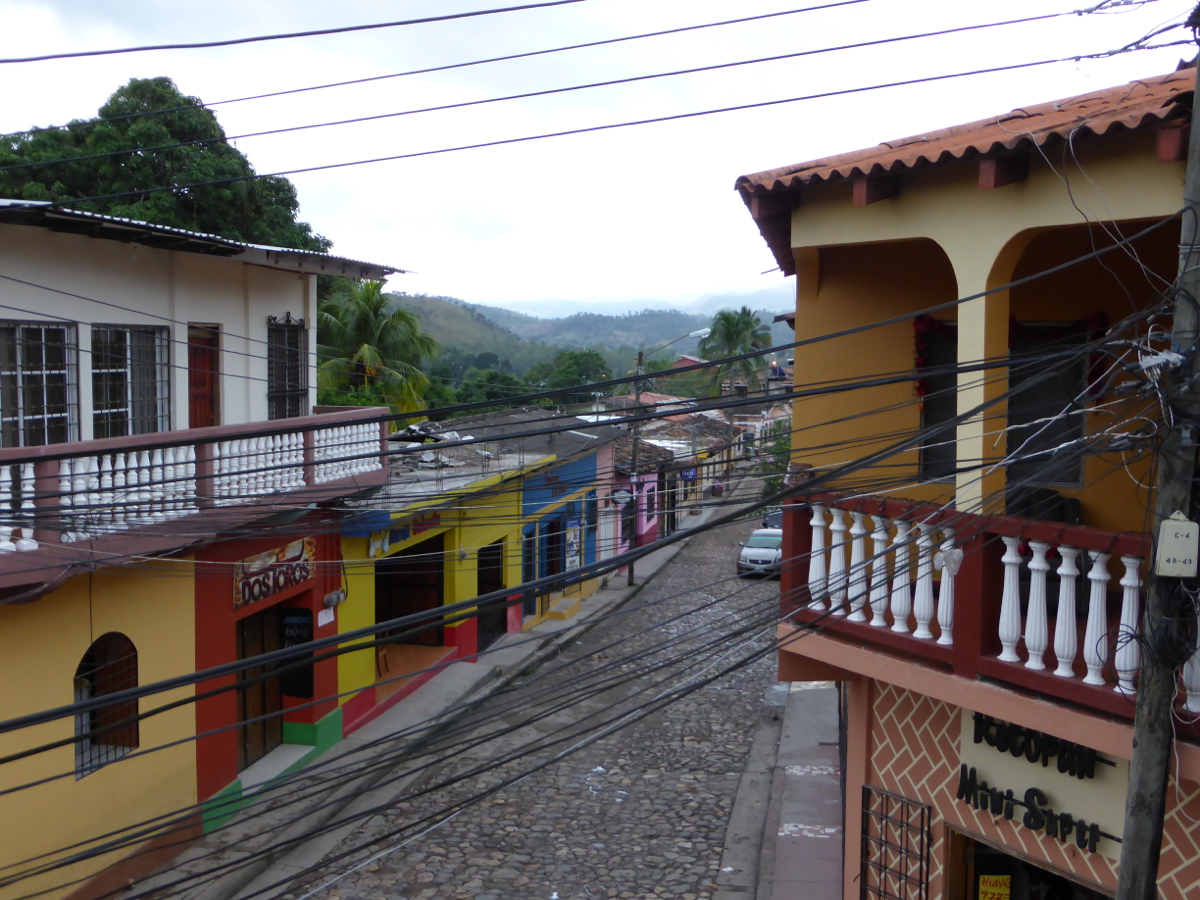 Copan Ruinas is a quaint town with cobbled streets and brightly coloured buildings, entrenched in Mayan culture and of course, Spanish colonial history. The key attraction in the area, with deep historical significance, is the Copan Ruins. This is a UN World Heritage site containing some of the most elaborate and extensive examples of early Mayan sculptures and hieroglyphics carved on magnificent staircases and stellae (columns/pillars).

We were dropped off in the centre of town by the taxi and made our way on foot to our hostel, The Blue Iguana. The hostel came highly recommended as clean, cosy and well maintained, centrally located to explore the town and its namesake. We were not disappointed with the hostel and quickly settled in to our spacious private room, even deciding to extend our stay to three nights instead of two. We enjoyed homemade vegan empanadas and cold beer while watching the sunset at The Blue Iguana’s garden deli next door. 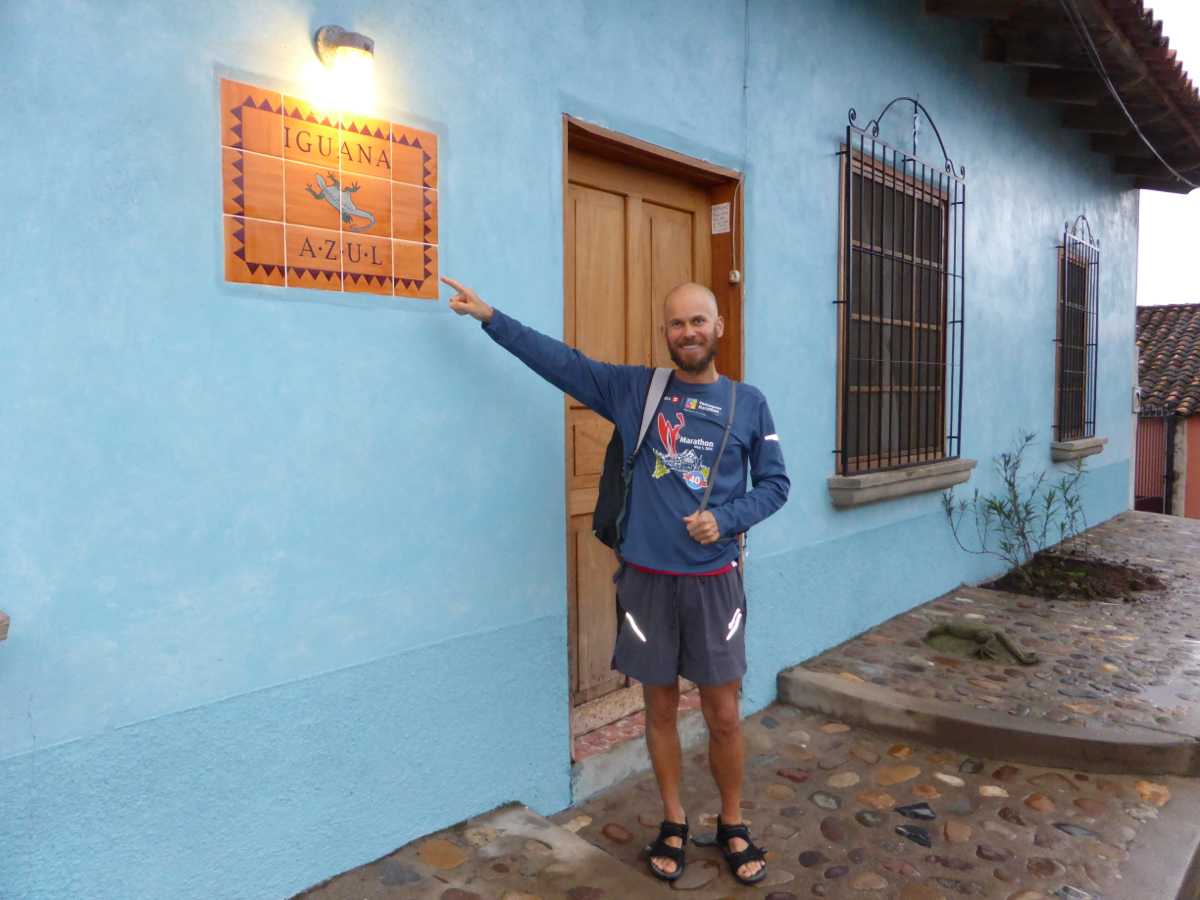 Richard outside The Blue Iguana

Our brief stay in Copan Ruinas had many highlights, most impressive of which was the amazing sacred ruin site with its breathtaking structures, intricate stone carvings, vast layout and jungle foliage. We took a $2 tuk-tuk ride from the town square to the visitor’s centre and spent a half day walking the site and taking in its many marvels. In addition to the ruin site, there are a number of nature trails and picnic areas on the premises. We were very surprised and delighted to find many beautiful and brilliantly-coloured macaws in the trees as we entered the site, and discovered that the ruins are also a breeding ground for these endangered indigenous birds. 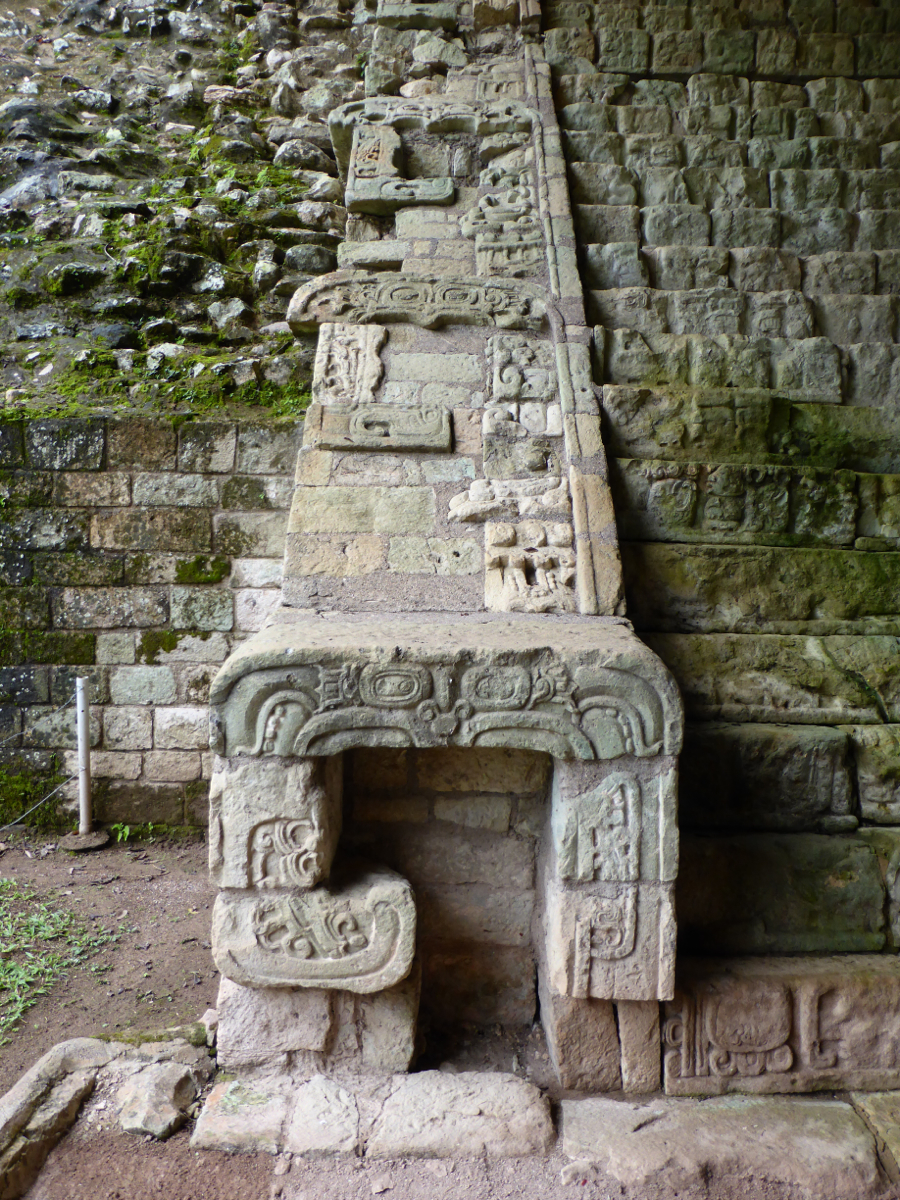 Close up of the staircase detail 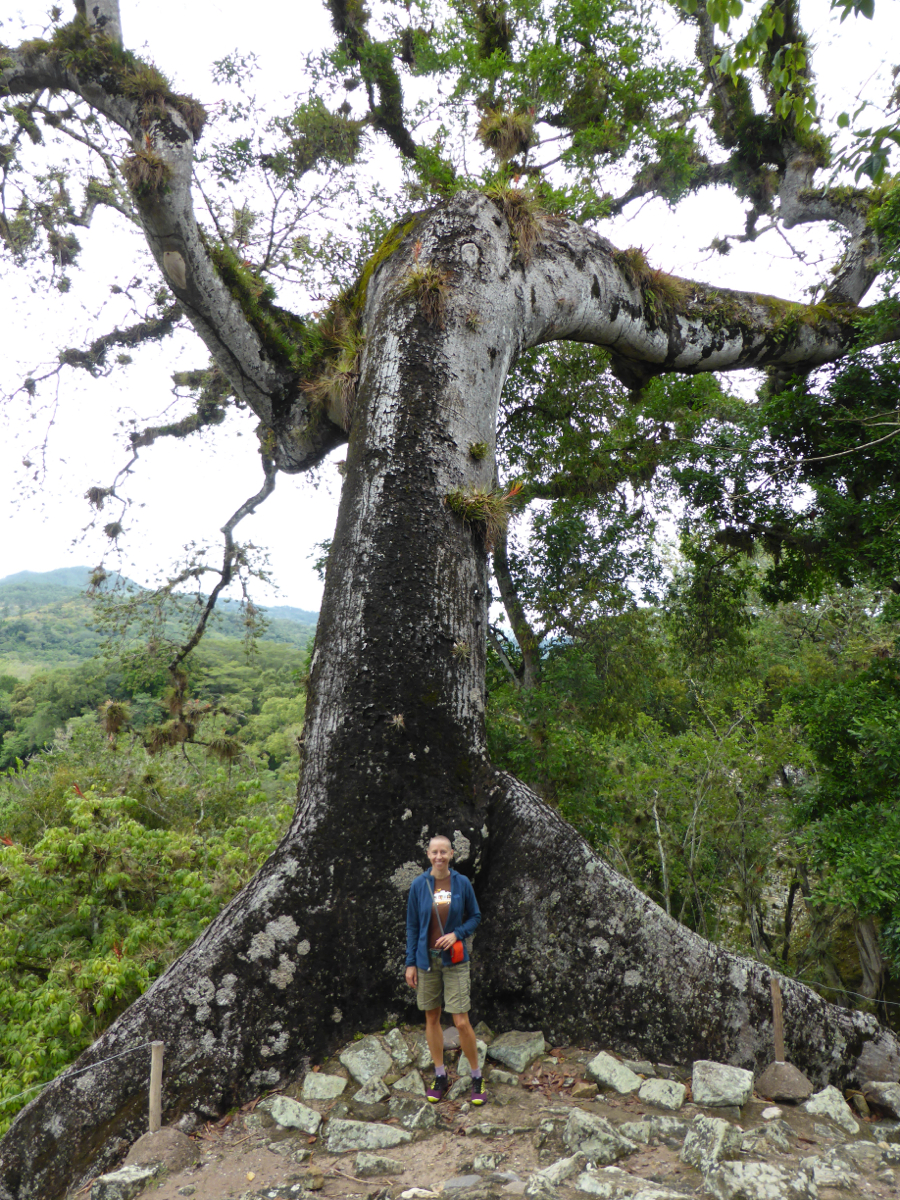 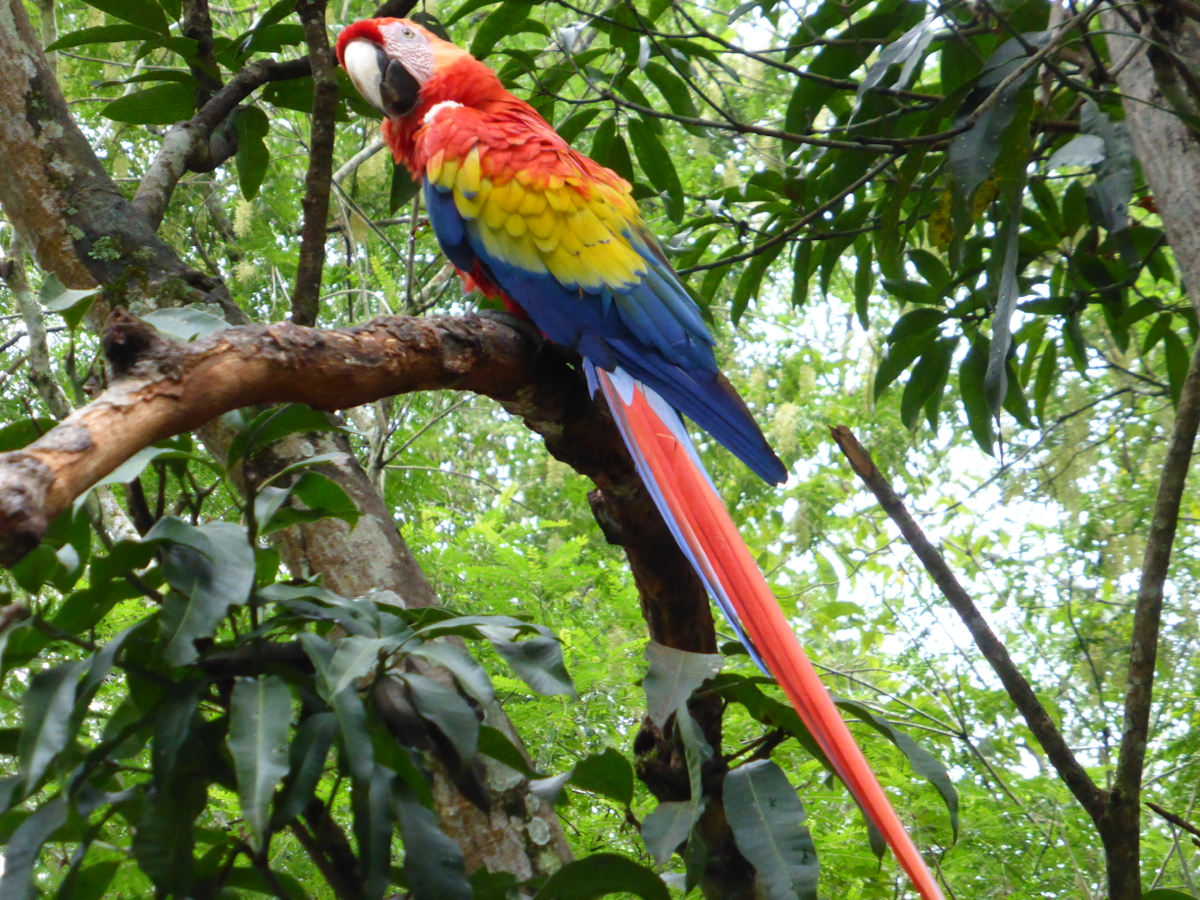 Other highlights included our first haircut since departure, expertly handled by Honduran barber, David. While exploring this very walkable town on foot, we came across a number of interesting sculptures in the town square. The square is a lovely meeting point for locals and tourists alike. The square, together with the fresh produce market, are typical elements in the Spanish colonial towns we’ve visited so far – and we really love the idea of buying fresh fruit and walking over to the square to sit, snack and watch the local scene unfold. We also discovered a wonderful array of comfy cafes and restaurants (like Twisted Tanya’s) with yummy cocktails, coffees and easily veganized food options. 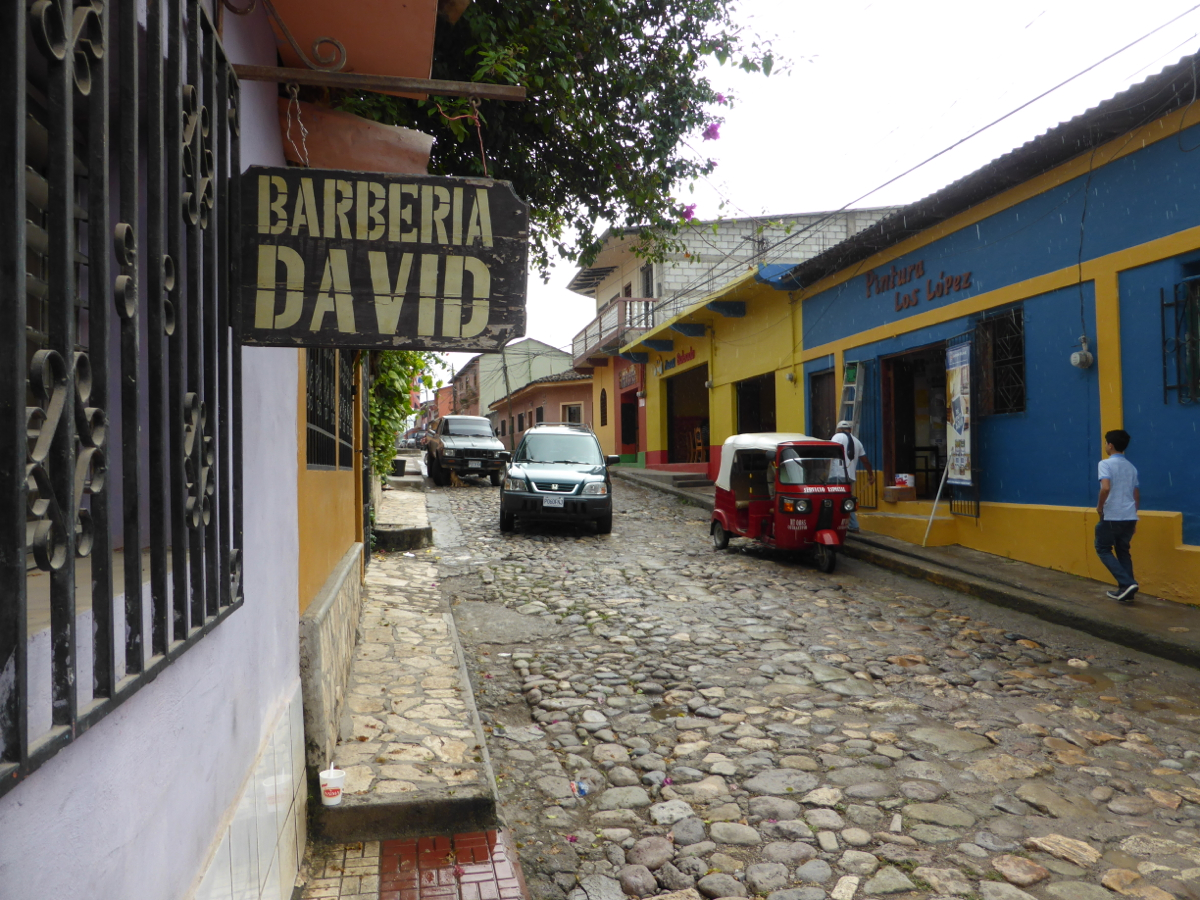 Time to visit the barbershop 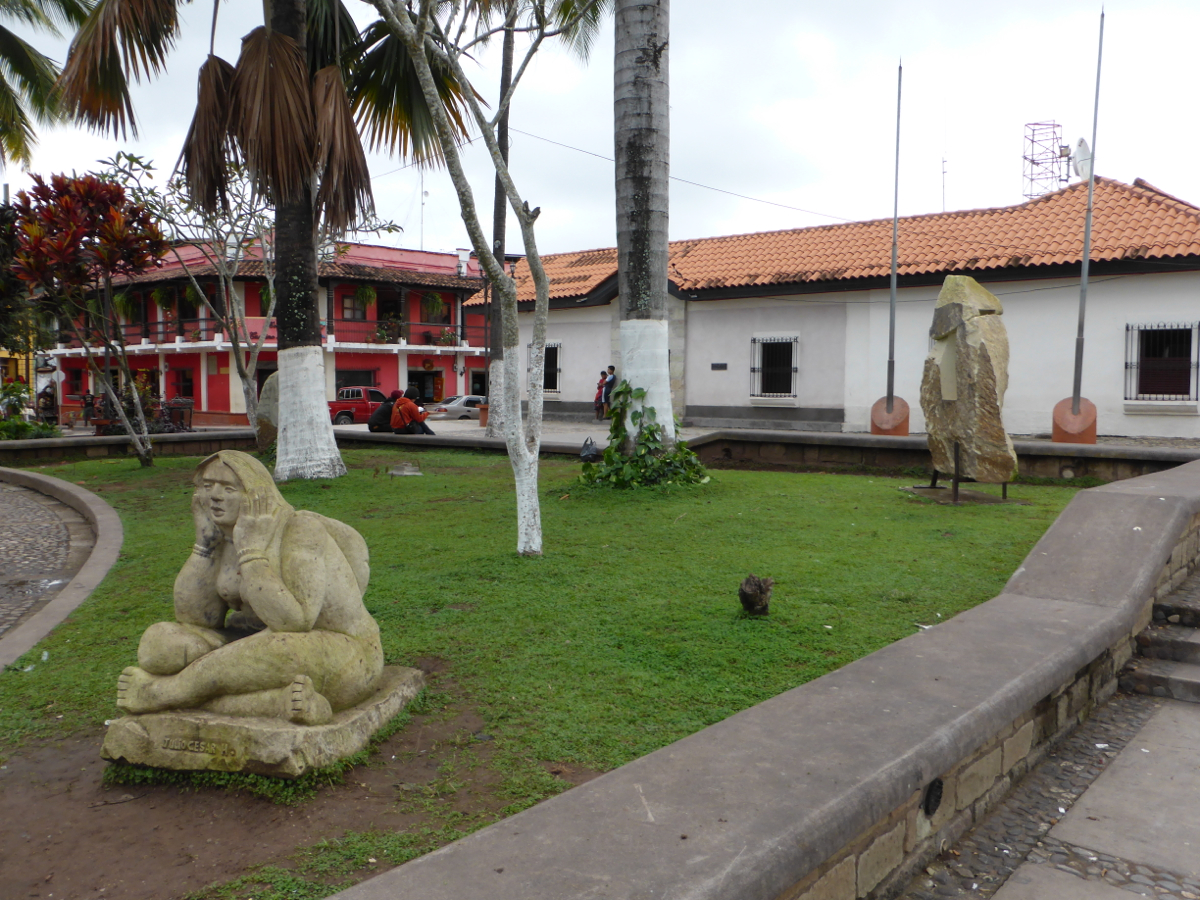 Although our stay in Copan Ruinas was short, we enjoyed our time there immensely and packed a ton into a few days. We even sent our first package home by mail from Copan Ruinas – with fingers firmly crossed that our goodies would find their way safely to Vancouver (and happily, the package arrived three weeks later)! Our departure came far too quickly, and before we knew it, we were packed up and ready to board the bus to the murder capital of the world, San Pedro Sula. But more on that adventure in our next installment!

Bev thumbs up: Serenity of the ruins, happy hour at Twisted Tanya’s (a great place to wait for a downpour to pass!) and The Blue Iguana
Bev thumbs down: Not enough time to explore the surrounding jungly hills and trails
Richard thumbs up: Awesome vegan pizza at Twisted Tanya’s and comfortable little town to explore
Richard thumbs down: Laundry not drying for three days due to two hours of rain every day!