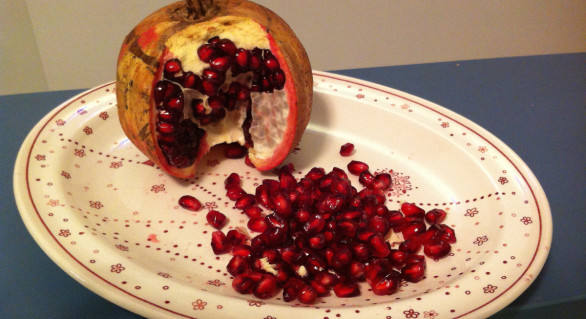 We arrived in Croatia from Rome, Italy, where vegan options were plentiful, fresh and delicious and the supermarkets well stocked. We were unsure what our options would be as we touched down in Dubrovnik and set out to explore part of the Balkan region for a couple of months. Our time in Croatia was mostly spent along the Dalmatian Coast and on the Istrian Peninsula. We enjoyed a good mix of small villages and big towns, and aside from one small island hamlet (Sobra on Mljet Island), were able to find everything we needed to make our usual healthy, happy vegan meals and even enjoyed several meals out.

After finding and settling into our accommodation, the next order of business in a new place is to orient ourselves regarding food. Since we mostly stay in places that have kitchen facilities, orientation usually entails locating the nearest grocery store or supermarket to stock up on supplies. It’s always exciting to explore a new store to see the selection of vegan-friendly products, along with local fruits and vegetables. 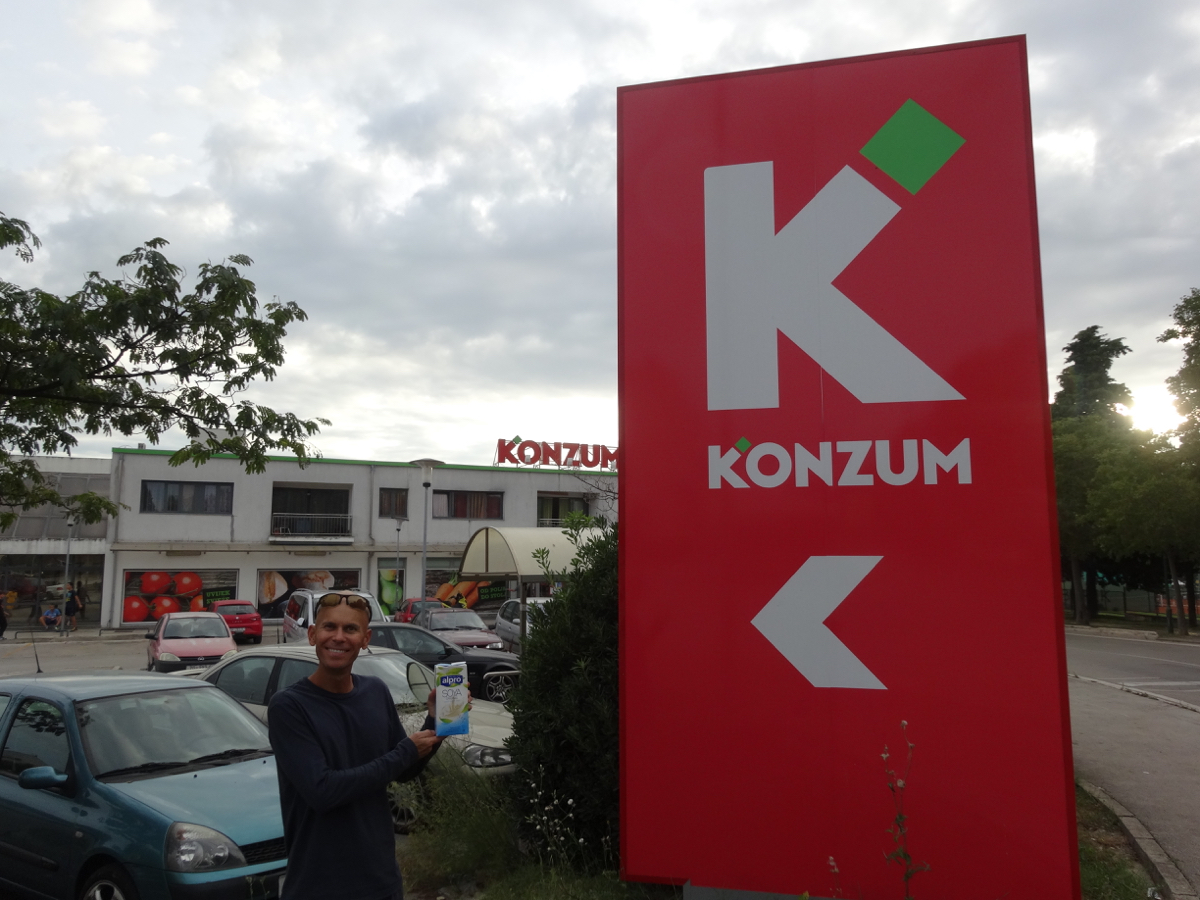 In Dubrovnik we found a supermarket called Konzum just down the street from our lodging, near to the main bus station and port. Konzum is a large Croatian supermarket chain and we were delighted to find a large “health food section” with all of our usual requirements: soy milk, oats, muesli, peanut butter, nuts, seeds, dates, and more. We subsequently found that other supermarket chains such as Tommy, Studenac and Pemo also carried most of the basics, but we generally shopped at Konzum since we found their selection, prices and freshness of produce to be the best. Pricing for typical items: 1l soy milk – 18 Kuna (C$3.30); 250ml peanut butter – 10 Kuna (C$1.85); bread loaf – 8 Kuna (C$1.50); 1kg bananas – 10 Kuna (C$1.85).

Our most challenging few days as it relates to food was on the island of Mljet. We initially decided to stay in the town of Sobra which is near the main ferry dock in the centre of the island. Unfortunately we were surprised to find that the small food store was very poorly stocked with supplies and almost no fresh produce. There are a handful of restaurants but their offerings are quite poor and we were not too thrilled about eating bland pizza and pasta for lunch and dinner every day!

So we decided to move to another village on the island called Polace at the entrance to the National Park, and were ecstatic to find two well stocked food markets (with soy milk no less!) as well as plentiful supplies of fruit and vegetables. There is also a bakery that makes the most amazing multi-grain bread (even better than the French and Italian breads we recently indulged in!). We’d certainly recommend Polace as a base if you visit Mljet and wish to enjoy nature while continuing with your plant-based diet. Although we opted to cook all of our meals in our apartment, there are a number of restaurants along the waterfront in Polace, many of which would be able to whip up a vegan salad, sandwich, pizza or pasta. You can read more about what we got up to on Mljet here. 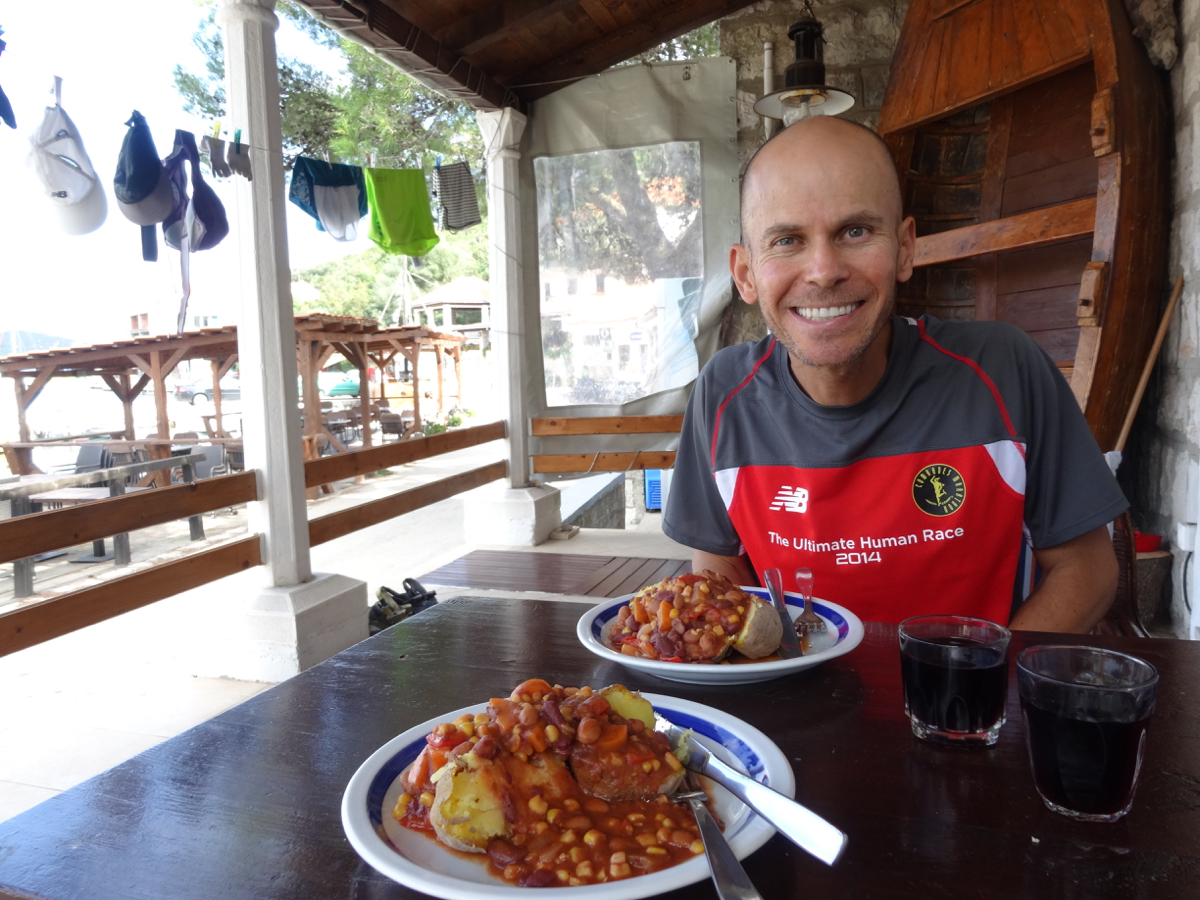 Bean chili over baked potatoes – one of our favourite meals enjoyed in Polace on our lovely patio! And of course, wine with lunch (a very civilized habit acquired in France)!

The bakery or “pekara” in Polace on Mljet Island

One of the very well stocked supermarkets in Polace

We also found a few natural/health food stores called “bio” shops in Dubrovnik and Split. These shops were very well stocked with local and imported natural foods, home and beauty products. We enjoyed a rare treat of tofu and quinoa purchased from one of the bio shops called Trgovina Refužo in Split, just a few steps away from the Riva. It was really great to chat to the store owner who has been vegan for many years and is working hard to promote a plant-based lifestyle in Croatia. The shop is very well stocked with nuts, seeds, grains and flours in bulk bins, along with meat alternatives such as tofu and seitan, and non-dairy milks. There is also a gluten-free product section. Here’s a list of the other bio shops we found:

What an unexpected treat to find tofu and quinoa in Croatia! We had a great time checking out bio store Trgovina Refužo in Split

Where possible, we also seek out markets to buy our food. We hoped that Croatia would be similar to the other European countries we’d recently visited. We were not disappointed by the produce markets, fruit and vegetable vendors and bakeries in every place we visited! Not only are the local ingredients fresher and more tasty, they tend to be cheaper too – especially when purchased at places where locals shop. Local fruits include mandarin oranges, grapes, pomegranates, apples, limes, melons and lemons. Local vegetables include potatoes (the best we’ve had!), chard (how we’ve missed you!), cabbage, zucchinis, lettuces, cucumber and tomatoes (yes, a fruit, but more suited to the vegetable list somehow!). Anything imported is quite a bit more expensive, but there is a good variety. 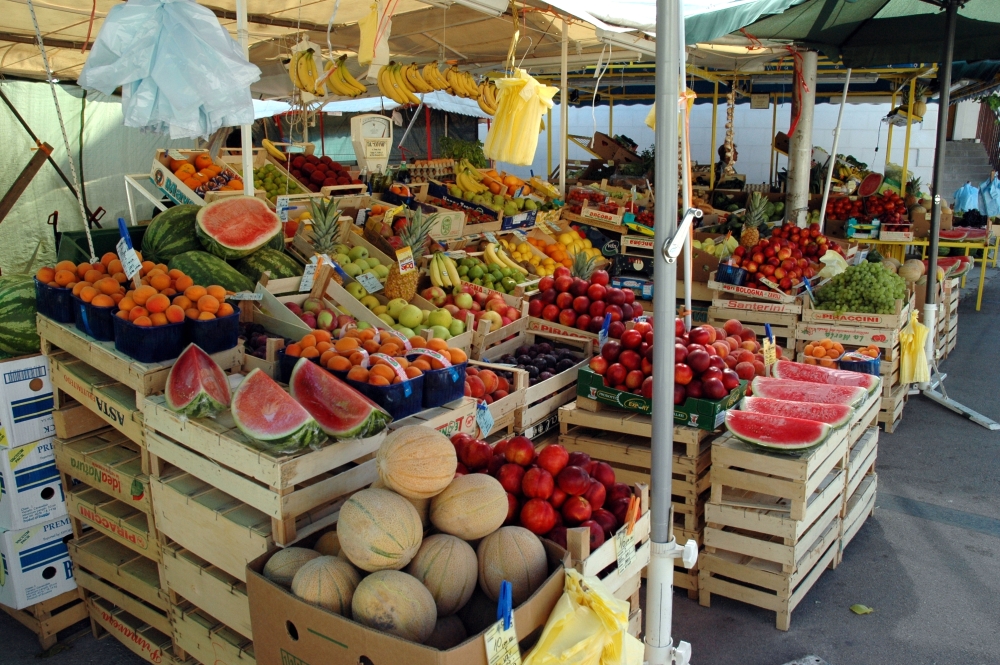 The “green market” in Split next to Diocletian’s Palace (photo credit: www.taxisplitairport.com)

Our typical breakfast consists of oats or muesli/granola with soy milk, nuts, dates, flax seeds, oat bran and banana. We had no problem finding any of these ingredients during our stay in Croatia. Lunches and dinners are usually interchangeable and we make large portions to allow for leftovers if we’re staying in one place for a few days. We generally make bean burritos, lentil stew, pasta with vegetable and tomato sauce, chickpea curry, soups and other dishes as we find available ingredients for a special treat (like tofu!). 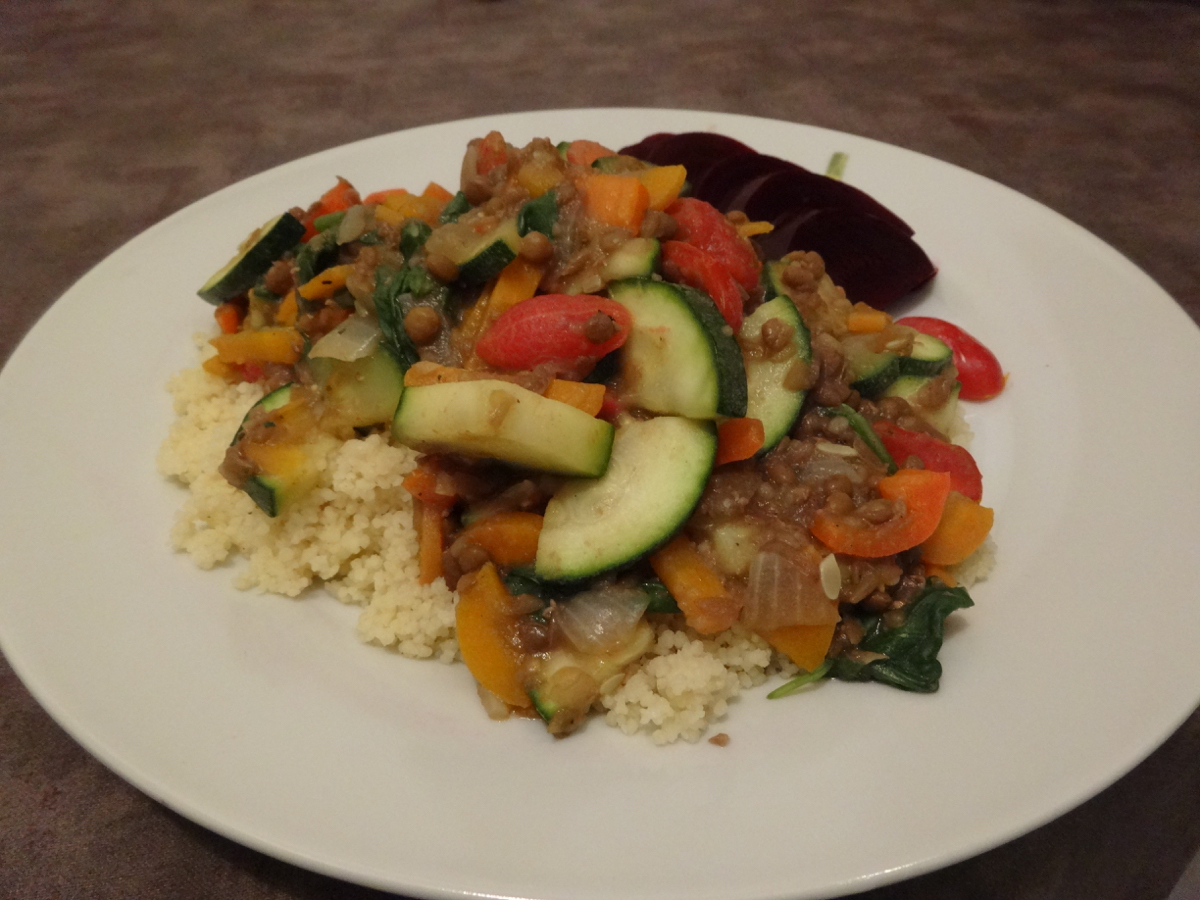 We don’t eat out very often on this global adventure with its backpacker budget, but we do like to support local vegan restaurants when we can. In Split we discovered a wonderful spot called Makrovega, serving reasonably priced daily set vegan and vegetarian menus, along with light meals such as veggie burgers, burritos and sandwiches. They also have a delicious variety of dessert items and fresh cold-pressed juices. There’s also another option in Split called Vege which is a take-out window located near the produce market. We didn’t get a chance to eat there, but wish we did! There is a popular vegetarian restaurant called Nishta inside the old city walls of Dubrovnik that we were hoping to try, but unfortunately it was closed on the day we visited the old town.

Lunch at Makrovega – we tried the burger and tofu burrito – both outstanding!

Generally we don’t have the luxury of choice for vegetarian or vegan restaurants, so we get creative, and work around the menu offerings, and sometimes, the language barrier! In Croatia, the most common restaurants are eateries called “konobas” run by local families serving mostly regional fare which is heavily weighted to meat and fish dishes. All of the restaurants we visited had pizza and pasta selections that could easily be made vegan, along with amazing vegetable side dishes. These restaurants offered up the best meals:

Sperun – Split (very heavy on seafood and local fare, but there are pasta options; we ordered the spaghetti with tomato sauce and a side order of each of the boiled and grilled veggies – wonderful flavours and generous portions but slightly heavy on the olive oil for our liking) 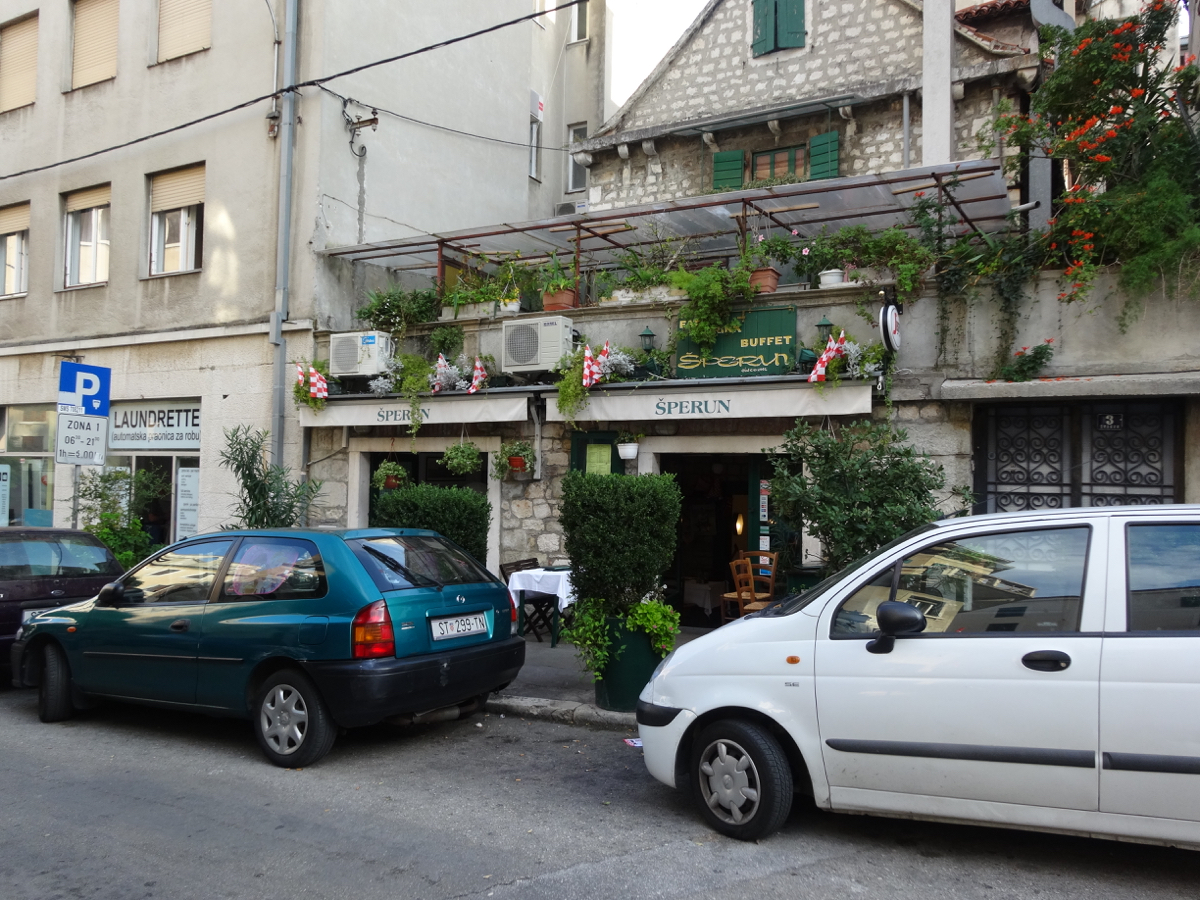 Bistro Toc – Split (we asked for a vegan version of the burrito with tofu and avocado instead of meat and cheese – very happily accommodated and delicious too!)

Pizzeria Napoli – Labin (we initially wanted to try a regional pasta dish called fuzi which is served with locally grown white truffles, but unfortunately the dish is made with cream and cheese; we opted instead for a veggie pizza with no cheese – again, happily accommodated and we weren’t disappointed!) 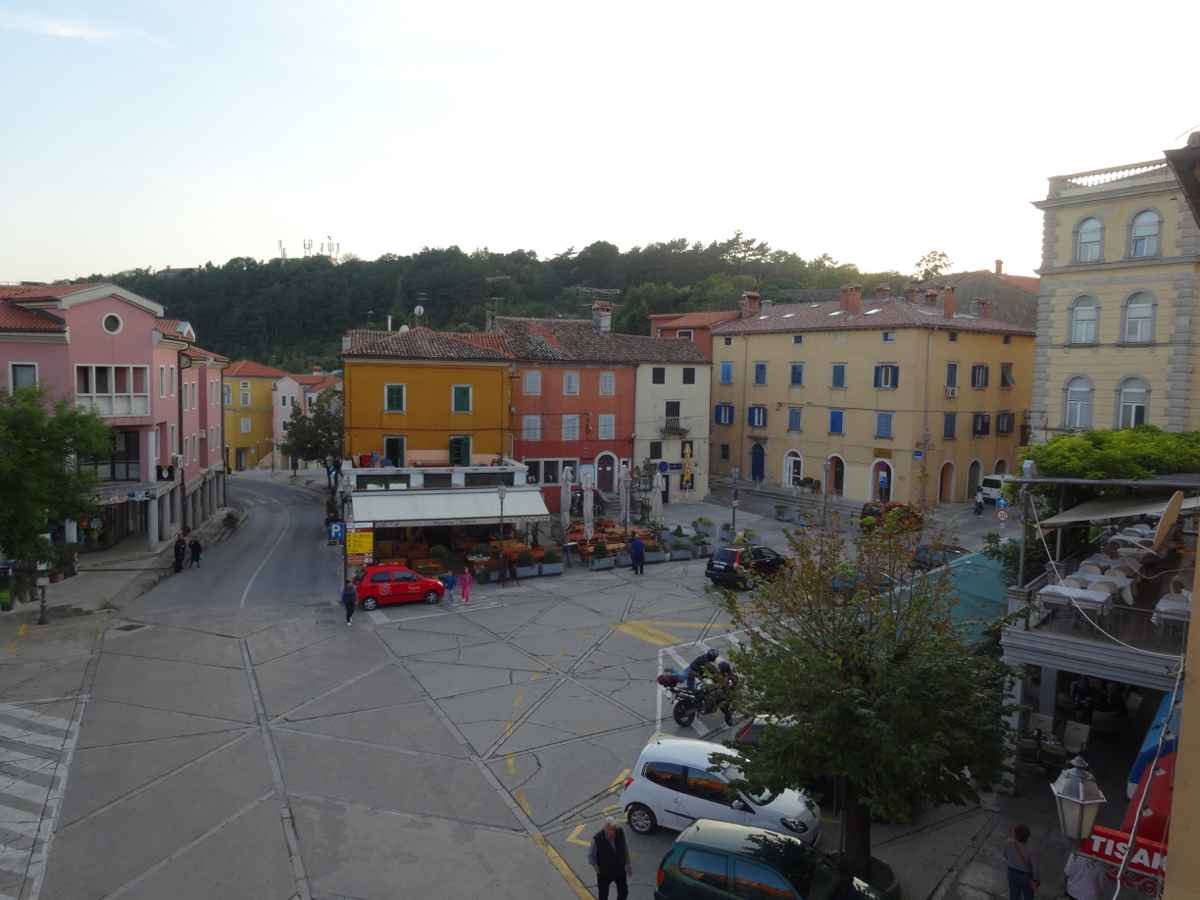 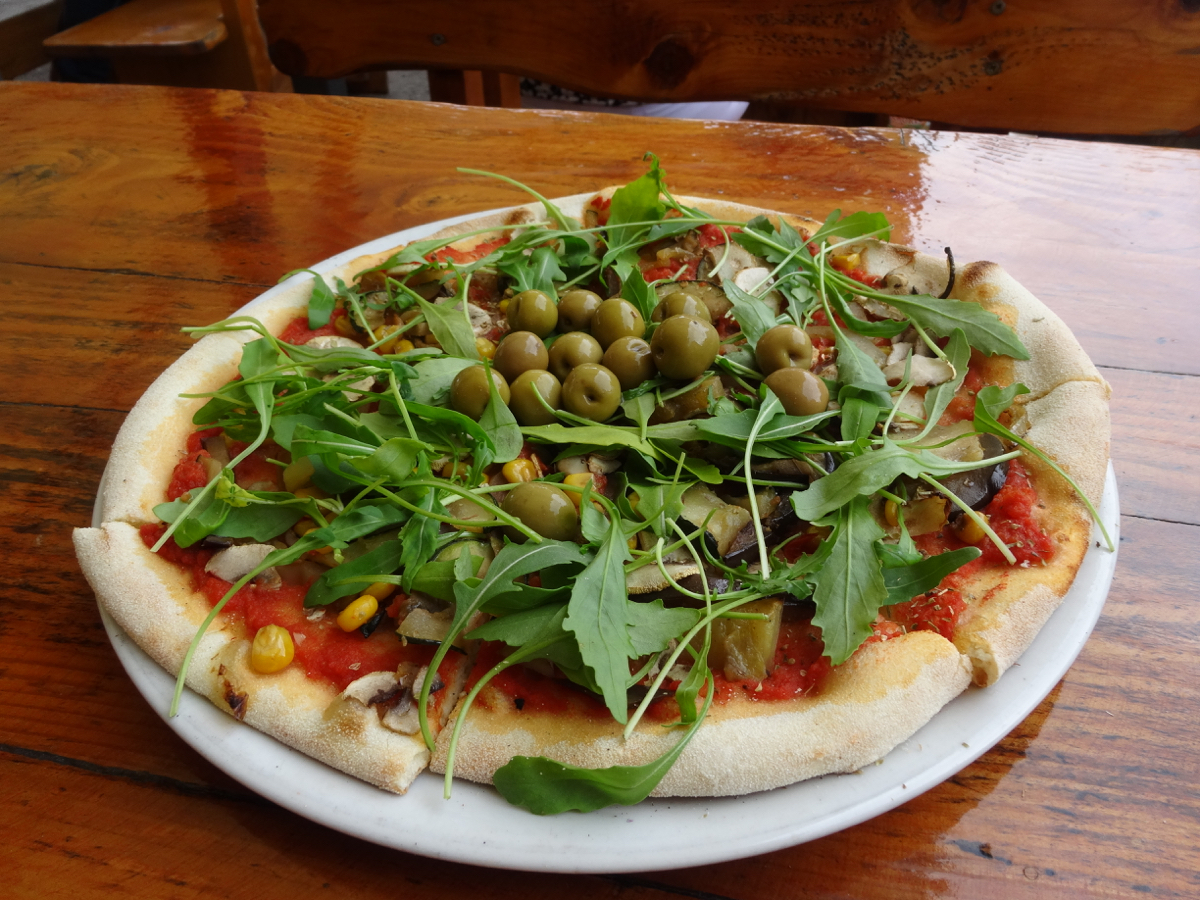 Being vegan in Croatia was much easier than we expected it to be. This is largely attributed to the availability of varied supplies in the supermarkets as well as our ability (and interest) to cook for ourselves. Eating out for every meal would be possible, but one of vegan inclination would be limited to pizza and pasta in most restaurants. There is also not very much ethnic diversity in the towns we visited, so typical options for vegans like Mexican, Thai or Japanese are not plentiful.

Hands down the easiest place to be vegan in Croatia is Split (compared to other larger towns we visited, including Dubrovnik, Zadar, Pula and Rovinj). Zagreb was not on our itinerary on this trip, but it’s likely that it would have more options than the rest of the country.

Most challenging food experience: Understanding the language to convey or request vegan requirements

There are 10 comments. Add yours