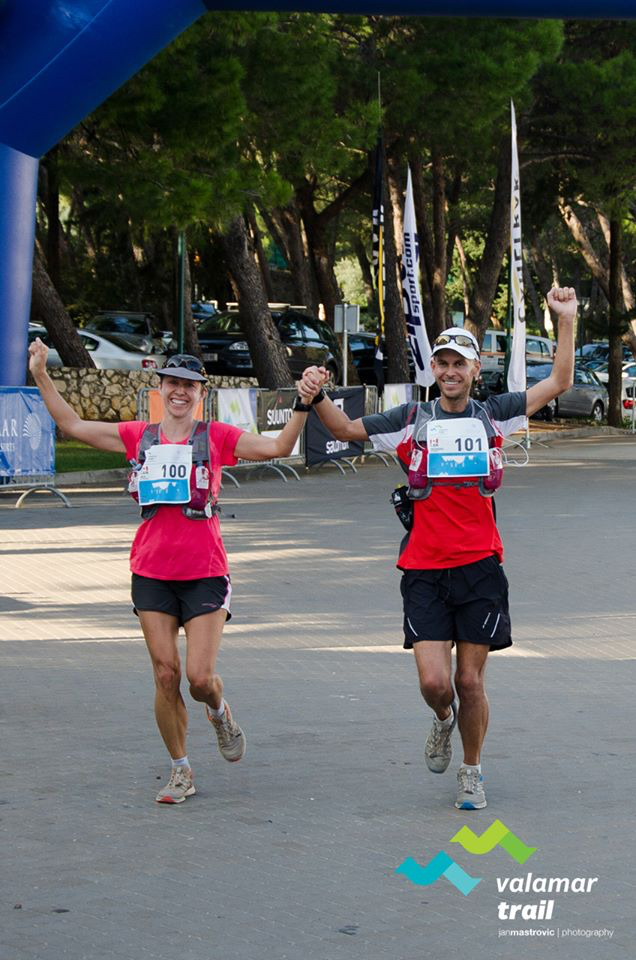 Amazingly, already just over three weeks have passed since running the fun and beautiful Valamar Trail 53K race on the Istrian peninsula in Croatia.

The Valamar Trail, this year in it’s first edition, did an outstanding job of organizing a fantastic day out on the trails of this very beautiful part of our planet. The day’s events comprised 4 different race distances, there was a 13K, 21K, 53K and a 73K, so there’s an opportunity for everybody to participate – beginning trail runners all the way through to experienced ultra runners.

The race’s main sponsor, in fact the race’s organizing body, is the Valamar Group of Resorts - a major resort group in Croatia. They offered an amazing deal, which pretty much sealed our decision to participate. Half board accommodation (bed, breakfast, and dinner) in a gorgeous 3-star sea-view hotel was being offered to race participants at only €19 per person per night. Additionally, if you stayed 5 nights the race’s entry fee would also be waived. It was perfect for a couple of round-the-world backpackers!

The race took place near a beachside resort town called Rabac. We arrived from Split a few days before the race and knew we had made a solid decision to enter the race as soon as we checked into our hotel (the Valamar Miramar Hotel). It was awesome. A gorgeous pool, super comfortable room, and pretty amazing food, which included soy milk on the breakfast buffet, left us in no doubt that a fun few days were on tap.

We packed our race vests and were ready for a very civilized race morning the following day since the race only started at 9AM and the start location was a mere 5 minute walk away. 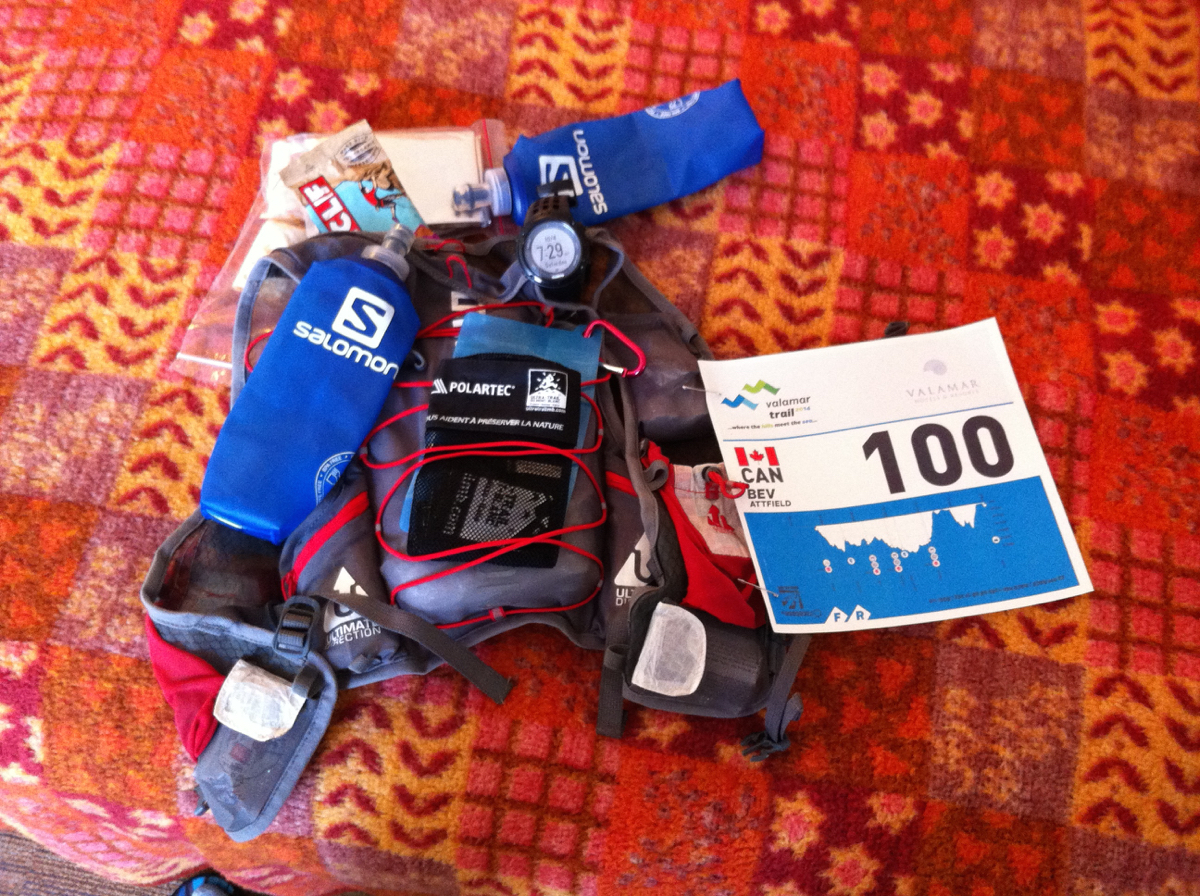 After a very comfortable night’s sleep, a quick breakfast of cereal and multigrain toast, we made our way to the start line where we encountered a festive and lively atmosphere.

After a couple of minutes spent greeting and chit-chatting with a few friendly, fellow racers we were off. The course started with a couple of road kilometers winding us through the village of Rabac before depositing us at the beginning of the business end of this anything-up trail race. 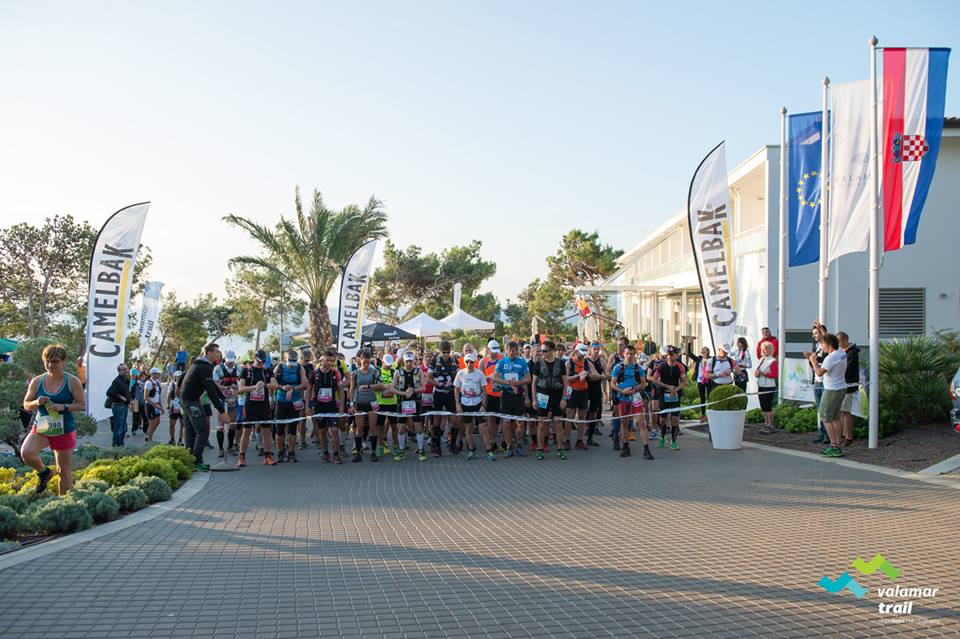 The first section of single track was simply awesome, we ran through dense forest (which included very sharp pine needles that drew a fair amount of blood from our lower legs), scampered the width of a rocky beach (with amazing views of the Adriatic), and before we knew it, we hit the first climb of the day. 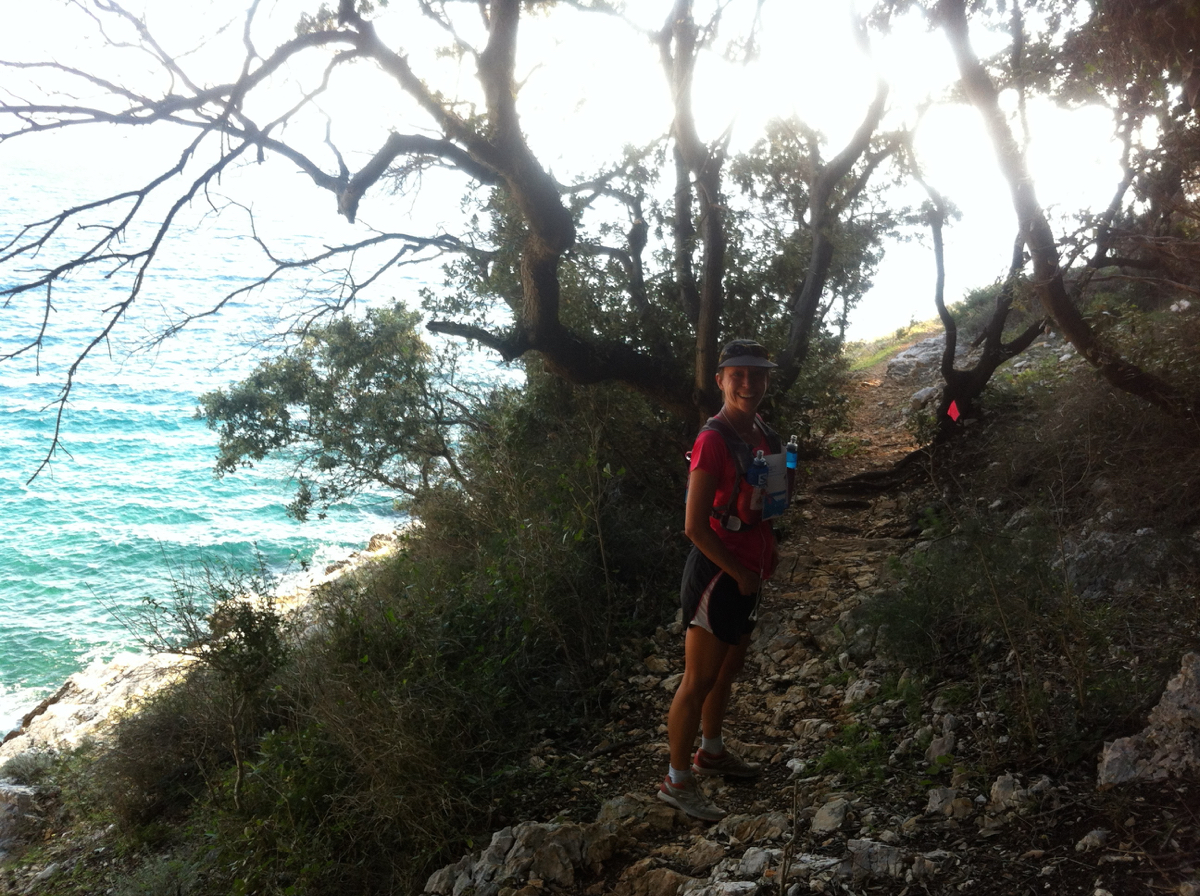 About to hit the beach 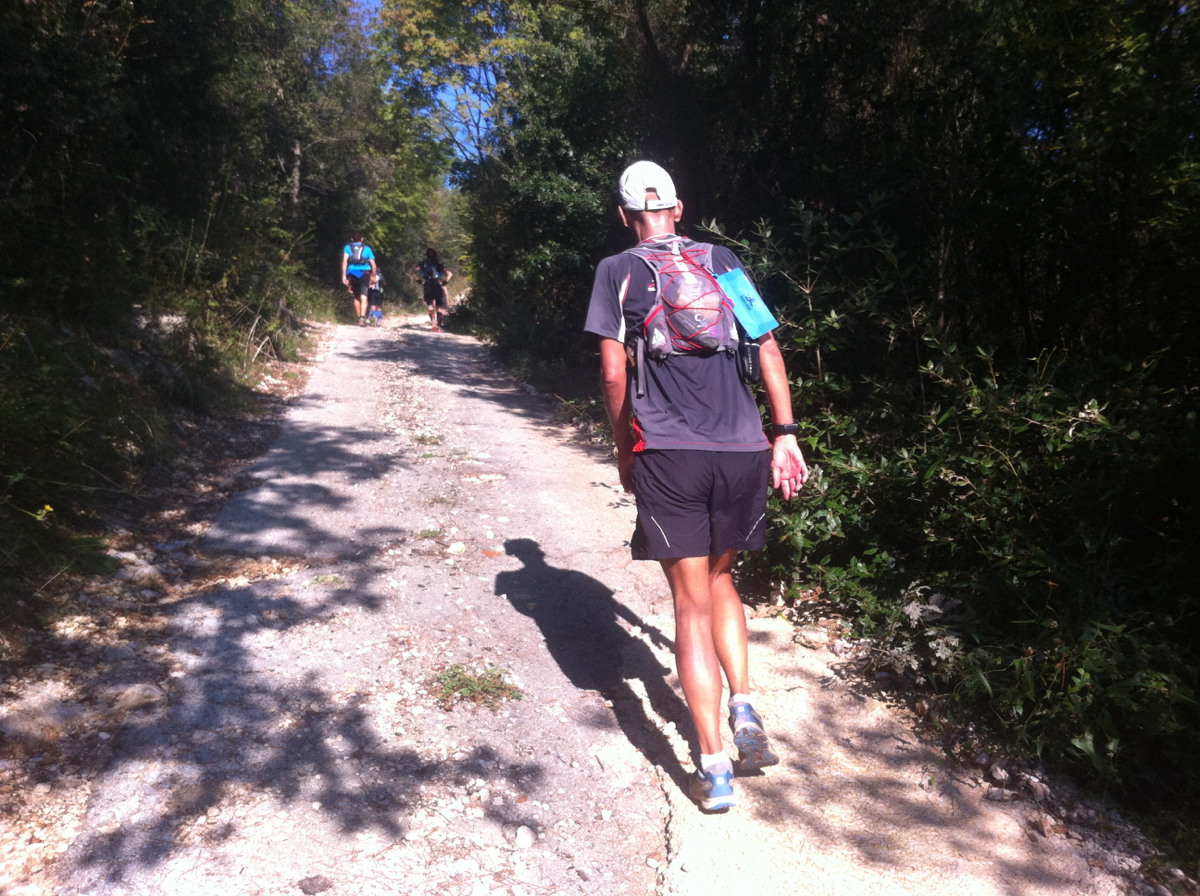 Bev was laying it down with an absolute vengeance in the the first 15km of the day, and I thought we were in for something rather special (if I could hang on that was!). She ran technical sections with more confidence and agility than I’ve ever seen and she trucked up climbs without fear. We were passing the field, and she was getting into a good position among the women. 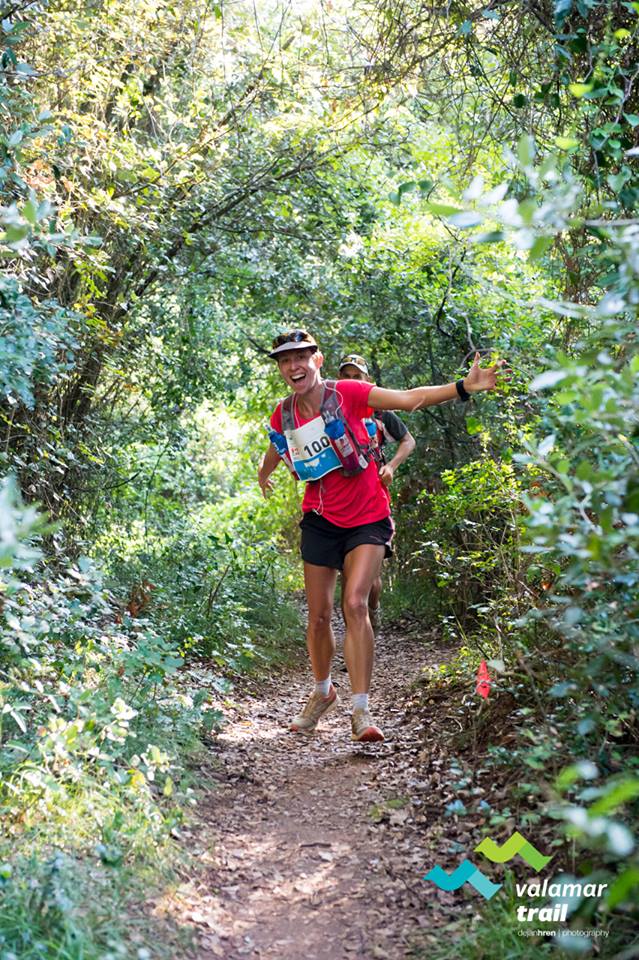 Bev was ripping up the single track and lovin’ it 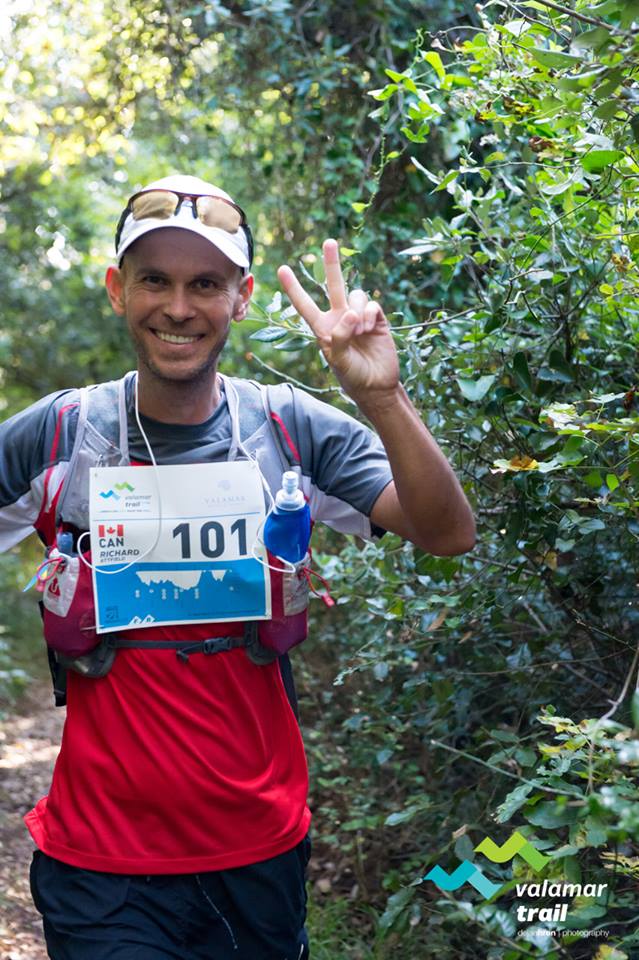 Unfortunately at about 20km Bev starting feeling nauseated and started carrying some pain in her lower back, and she started slowing down. At one point she felt so bad, that she contemplated something she’d never even thought of before during a race: dropping.

Of course, that is not the sort of thing Bev does, and after a short little cry brought on by frustration, pain, and heat she renewed her resolve and continued trucking along. When we finally hit the aid station at 31km she ate a few handfuls of salty potato chips, washed it down with the provided isotonic sports drink and got going again with real intent. 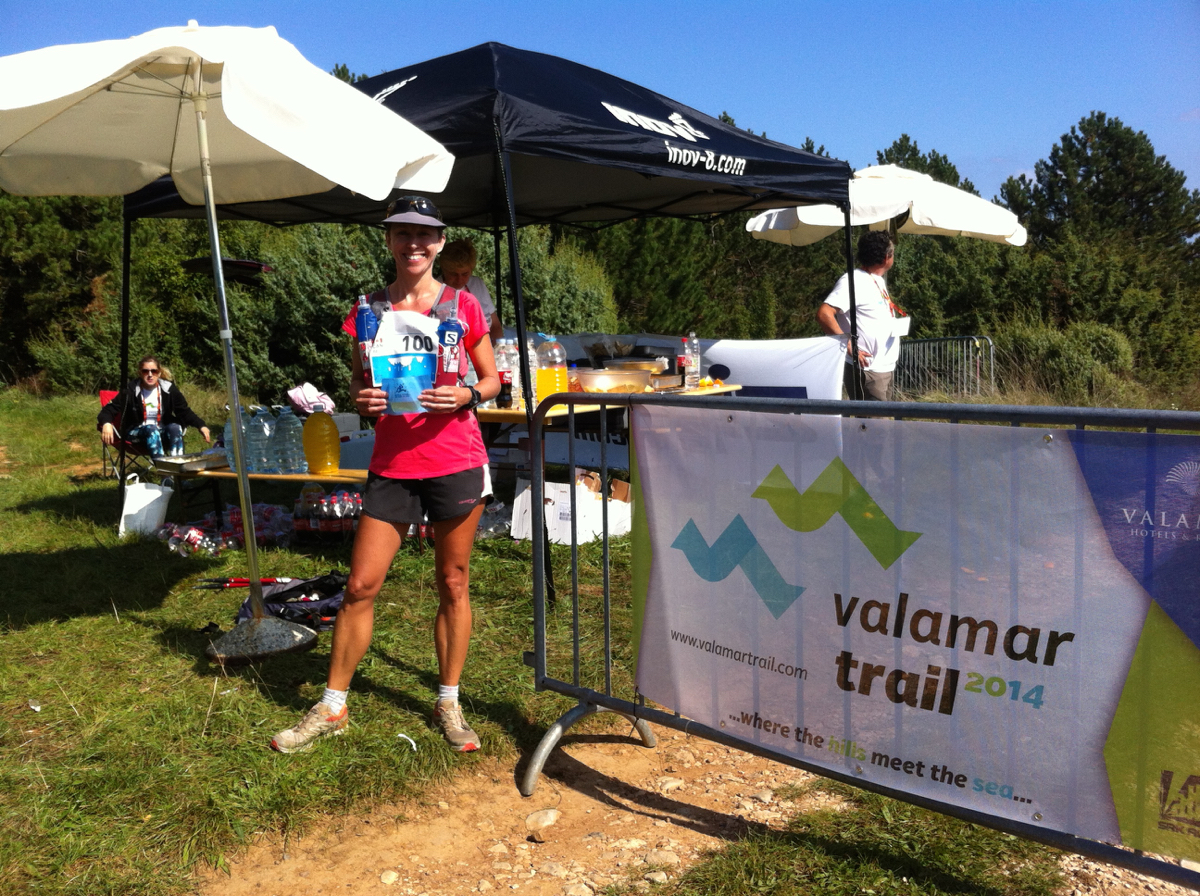 Bev getting her groove back at the 31km aid station

We had run hard to this point, and both of us had suffered a bit in the heat, and did a good job cursing the unbelievable rocky surface underfoot, but we were determined to put in a solid effort in last 22km of this beautiful, but tough, course.

Buoyed by the knowledge that we only had about 20km to go and that most of the day’s climbing was behind us we were on a relative high (maybe it was the salt on the chips)! But little did we know just how many rocky miles lay ahead. This part of the world is basically made out of limestone and the surface underfoot for the remainder of the course was some of the rockiest terrain either of us had ever seen. Our feet had already taken a beating to this point but the worst was yet to come. Fatigue combined with hard, uneven surfaces make for a challenging time. To make matters even worse, the terrain was so rocky that running was becoming a risky proposition, which meant that we were going to be out there for that much longer. 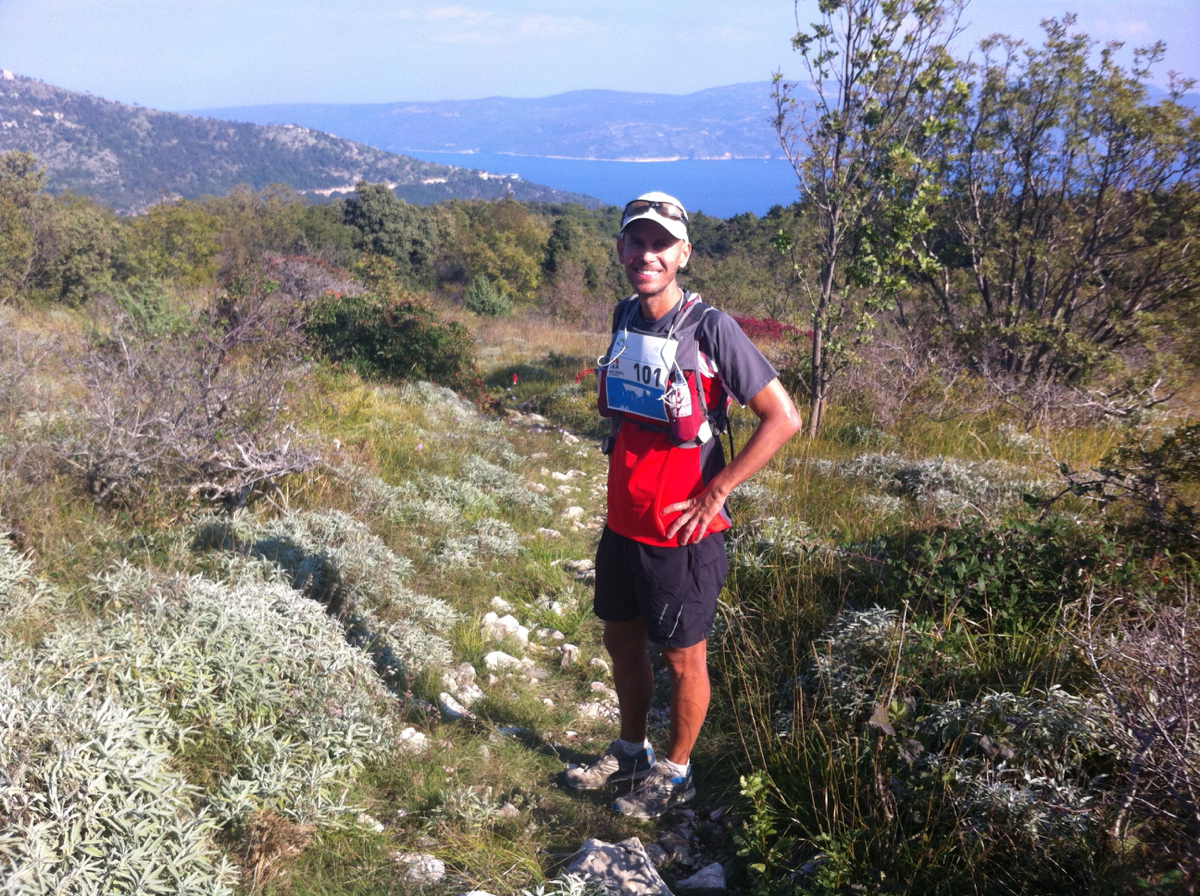 The final 8km was pretty much all downhill, and consisted almost exclusively of rock strewn jeep track; running on it required our full attention for fear of snapping an ankle or bruising a heel. There was an amazing view over the Adriatic as we closed in on the return to Rabac where the finish line (and a lovely cold beer and hot meal) were waiting. 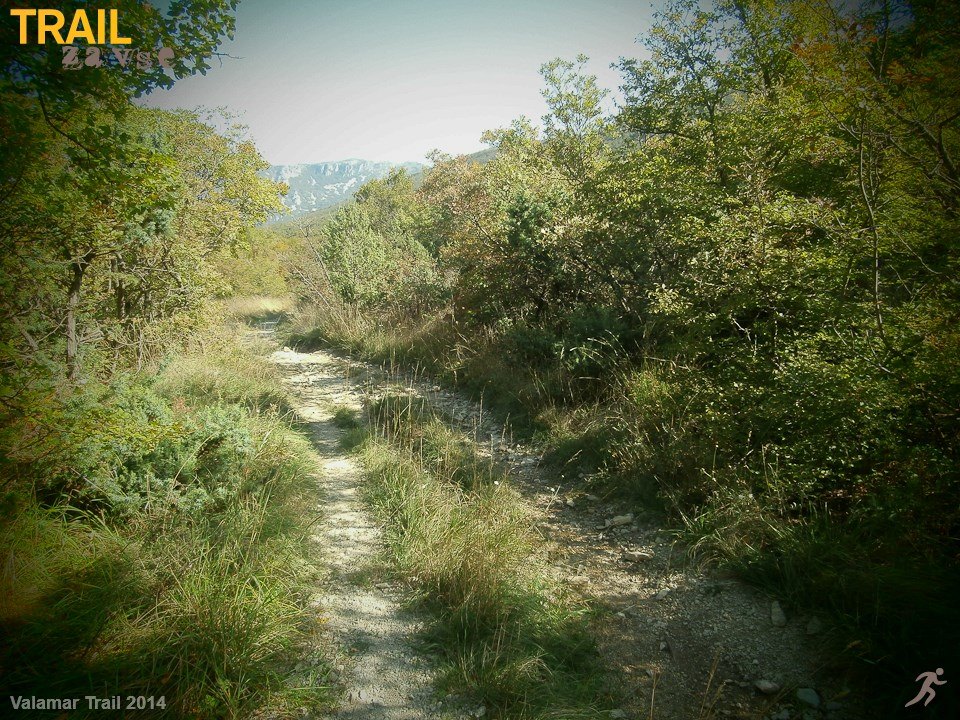 As has become our thing, we crossed the finish line hand-in-hand, while the announcer excitedly announced our arrival with  “and here come our two Canadians!”). 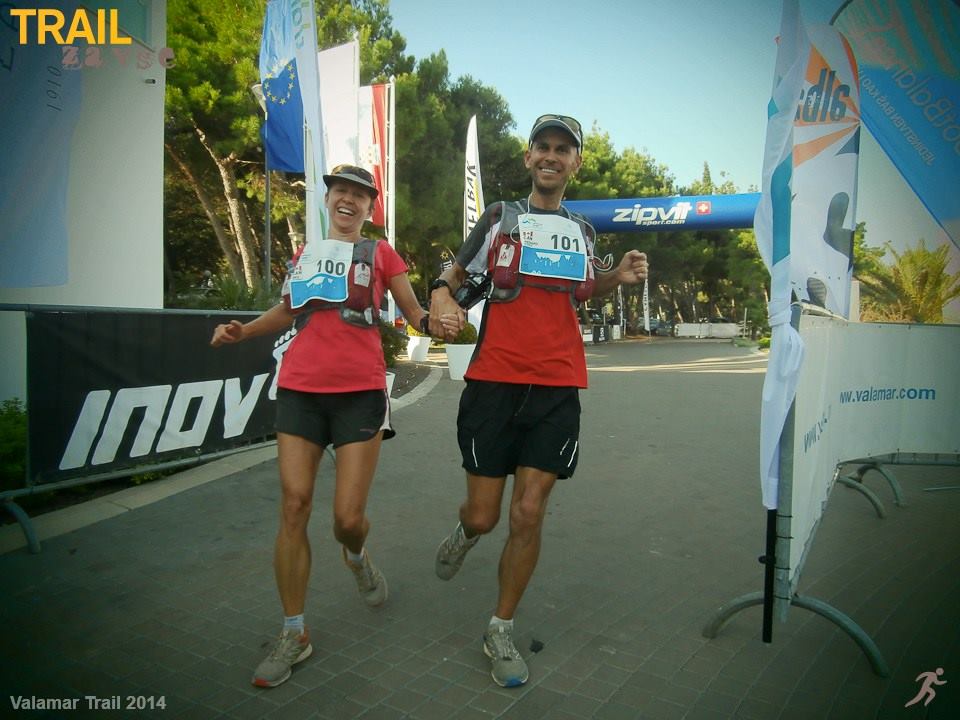 Another shot at the finish

Our official finish time was 7:57:00, which we thought was reasonable, but when we later discovered that Bev was only 26 minutes out of 3rd place among women overall (and only 31 minutes out of 2nd place) we were rather pleased with the time.