Hong Kong is a special administrative region of the People’s Republic of China. Home to over 7 million people, it’s one of the world’s most densely populated cities. It’s an incredible melting pot of people, customs, and cultures seen, smelled, and heard in the myriad of streets, alleyways, and waterways. It has one of the world’s most recognizable skylines and harbours, with giant, towering skyscrapers, and row after row of tall residential buildings set perched on the edge of mountainous landscapes.

Our stop in Hong Kong was the back book-end to our incredible adventures around the world that started in November 2014. We picked this spot because of its proximity back to Vancouver, but we hoped that it would intrigue and delight us beyond its connection to our home town. We weren’t disappointed! Here’s the first of three instalments: running in Hong Kong.

We wondered how we’d connect with nature and put foot to trail amidst this concrete jungle. Boy were we surprised! Our 6-day visit to Hong Kong blew our Injinji toe-socks off for so many reasons: incredible lush, hilly, scenic trails nestled in lush greenery on Hong Kong and its surrounding islands; the amazing range of delicious asian inspired veggie food; an incredible transport system that moves many millions of people daily; and its fascinating history with many visible remnants of its roots.

We split our time between the islands of Hong Kong and Lantau. On Hong Kong we stayed at a hostel in the Fortress Hill district. We focused our running on urban “trails” through the streets of Hong Kong and up to and around the forest land at the top of Victoria Peak. In the city we discovered a delightful urban recreation area called Victoria Park where locals jog around the running track and practice tai chi daily. A really authentic experience!

Topping out at 552m, Victoria Peak is the highest mountain on Hong Kong island. While the summit itself is off limits, this is home to a very popular lookout over the sprawling cityscape and harbour below. There are many ways up to the Peak and its access to nature, including a historic funicular railway dating back to 1926. For the avid trail runner or hiker, there are a few options to reach the Peak. Google this and you’ll be amazed at how many pathways there are to the top at both day and night – including an incredibly intricate set of stairs that run up alongside the tram. We didn’t have time to get up to the Peak on foot, but we did spend time running along the trails once at the top. 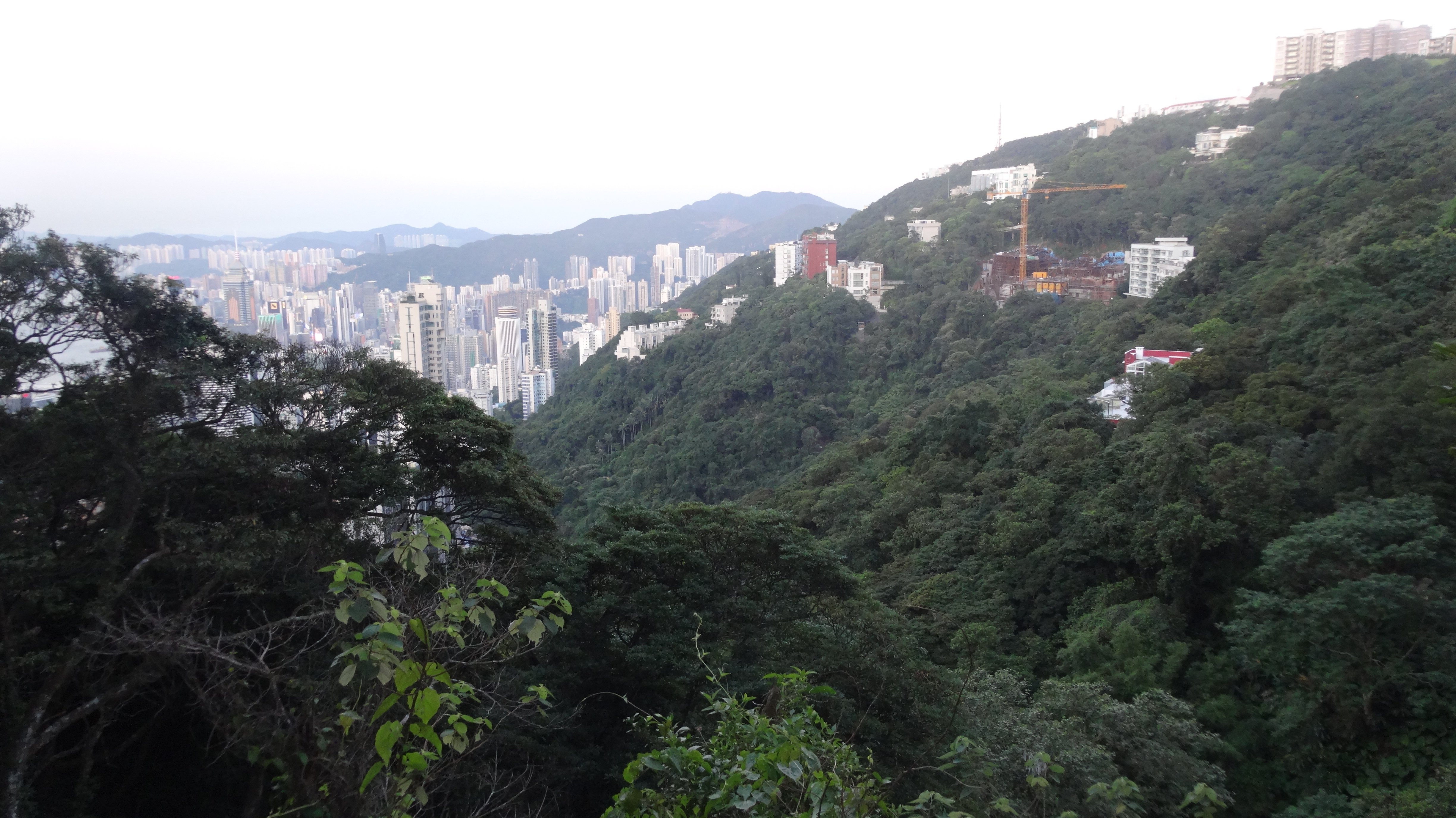 Views along the trail atop Victoria Peak 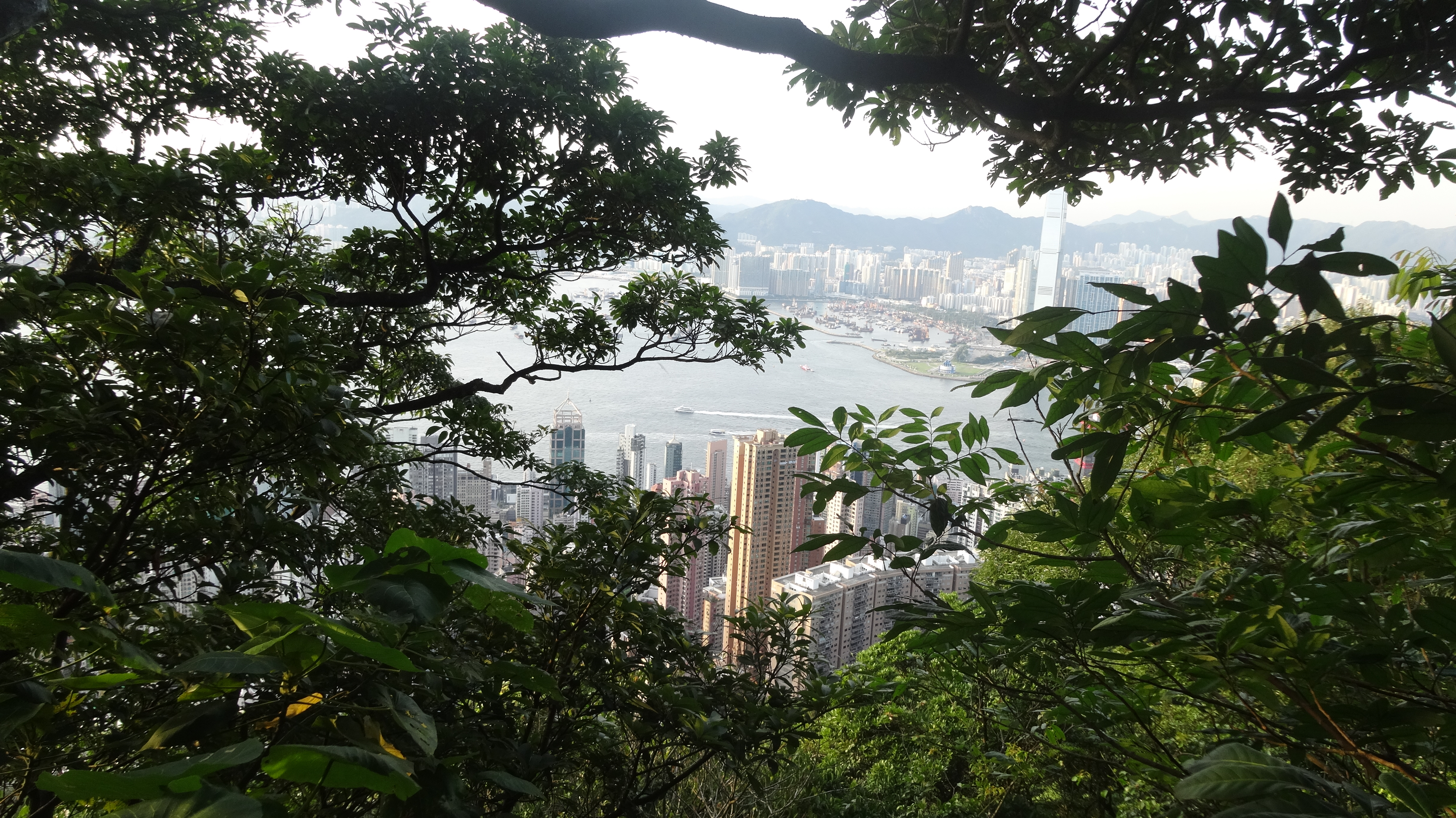 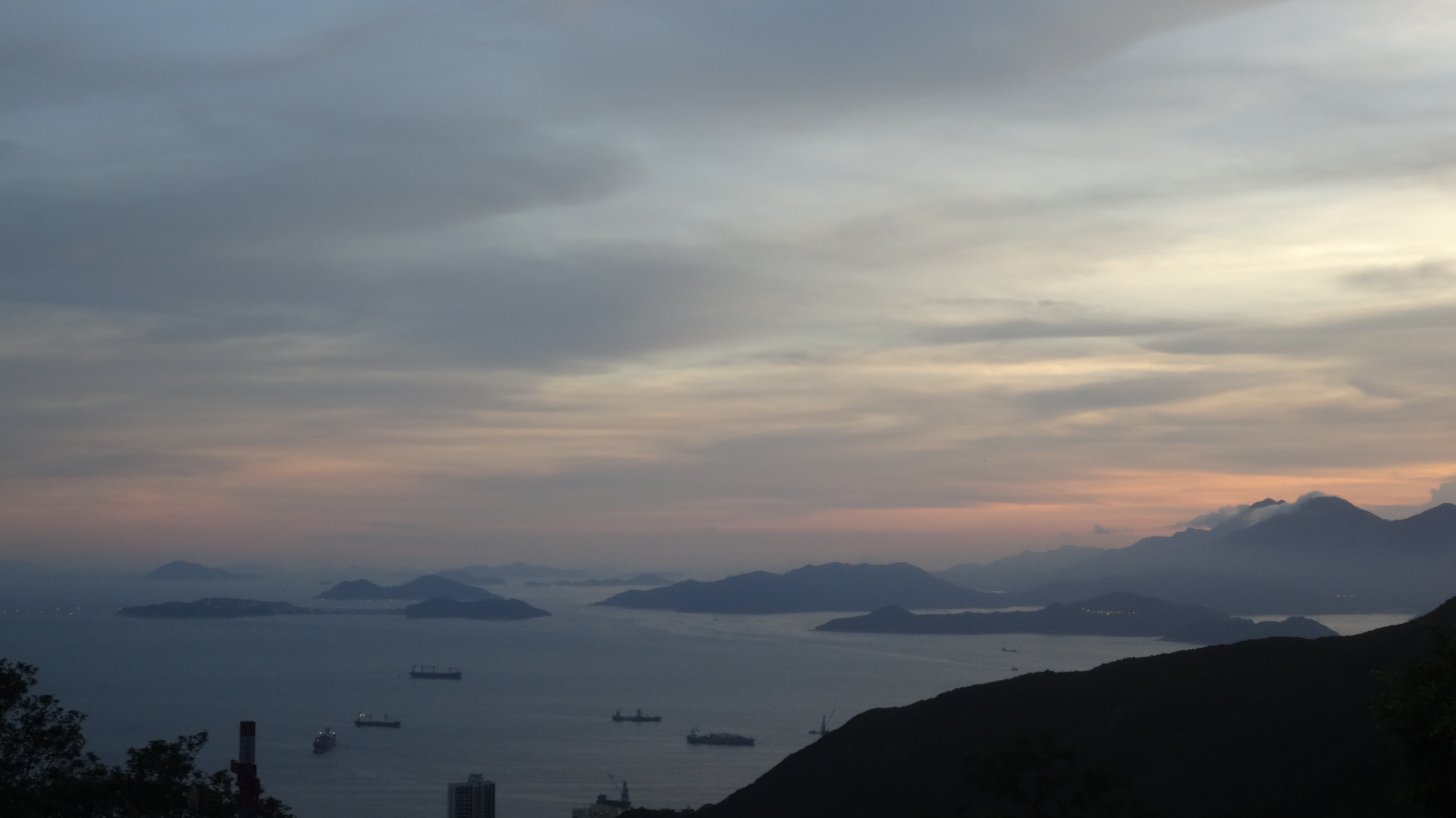 From this vantage point, there are views across the many bays and over Hong Kong’s neighbouring islands. The trail system criss-crosses the mountain side and top, meandering through lush jungle vines and banyan tree canopy. There’s roughly 25km of trail if you follow the Hong Kong Trail system. We ran about 10km out and back from the main Peak visitor area, stopping along the way to enjoy the views of nature and city alike. The pathway is easy to follow and mostly paved underfoot. We wish we’d had more time to get into the backcountry and explore the extensive network of trails on Hong Kong. But, it’s always good to leave something to come back to! 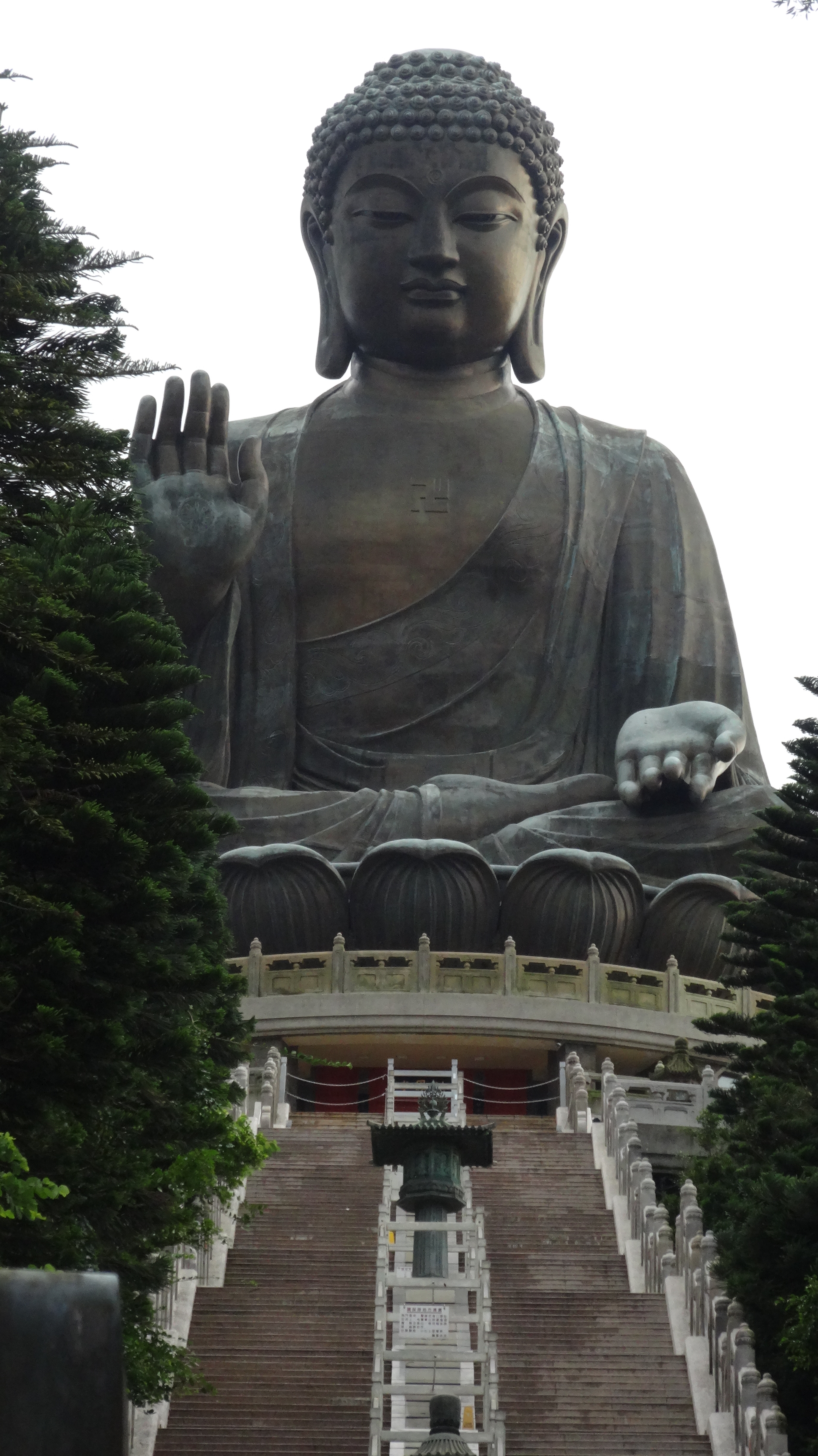 This qualifies as a *large* buddha statue!

Leaving the hustle, bustle, and bright lights behind us, we moved on from Hong Kong Island to nearby Lantau Island. We arrived on Lantau by ferry and caught the bus to the village close to our next hostel. The village is home to the Po Lin monastery and a 34 metre tall bronze Buddha sculpture. After a bit of bushwhacking we arrived at our hostel, just before the first of many intense downpours began.

Determined not to let the rain dampen our spirits, we grabbed a break in the weather and set out on an exploratory run to get a taste of the 70+ km Lantau Trail. This is a circular hiking trail that explores the southern half of the island. The trail includes a hike up Lantau’s highest mountain, Lantau Peak, at 934 metres. With no intention of completing the full circuit (this time!), we did manage a 3-hour out and back run which included going up and down the peak. The foliage and surroundings were far more wild and jungle-like than the trails we explored on Hong King Island.

The Lantau Peak trailhead close to our hostel 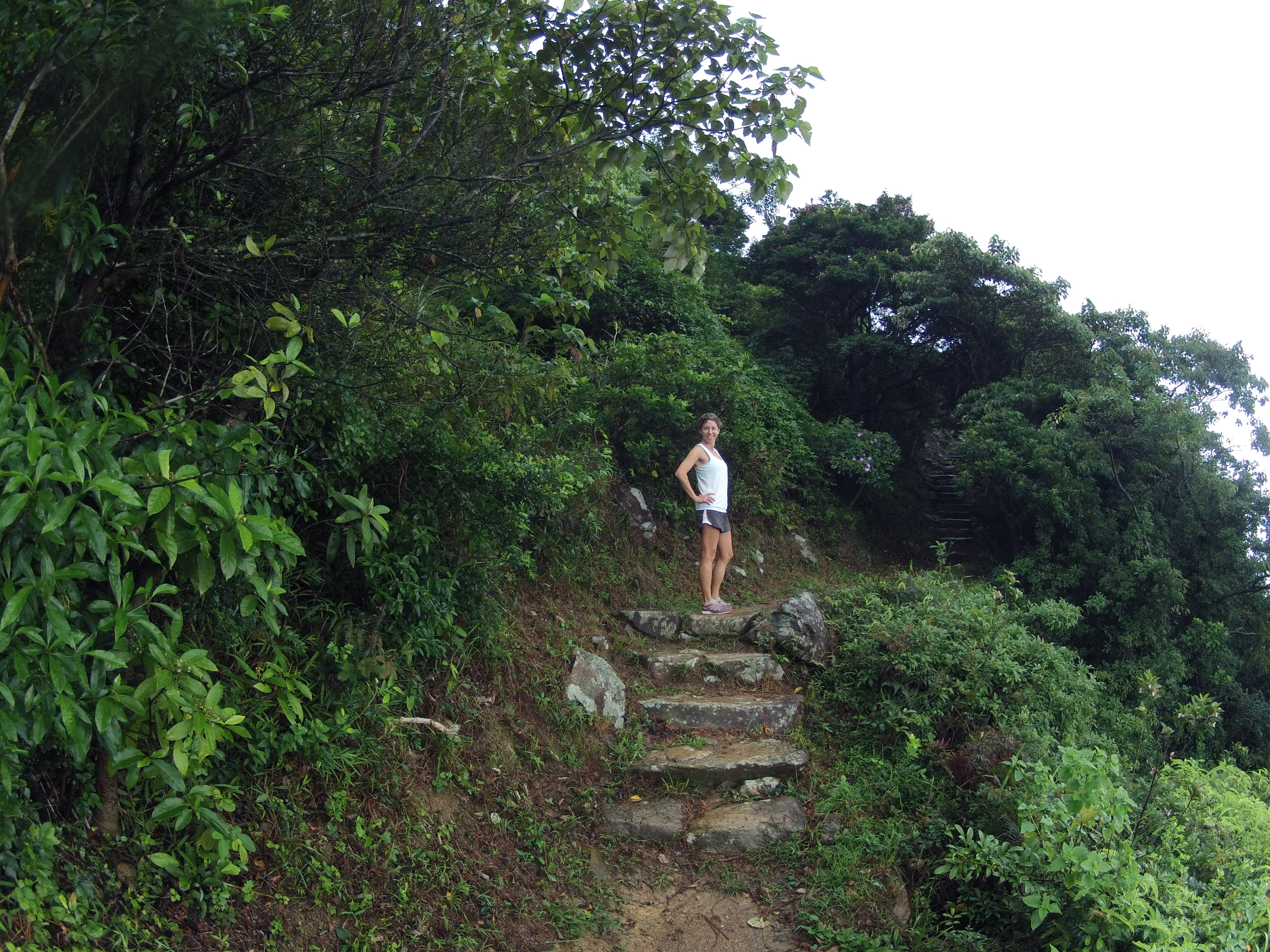 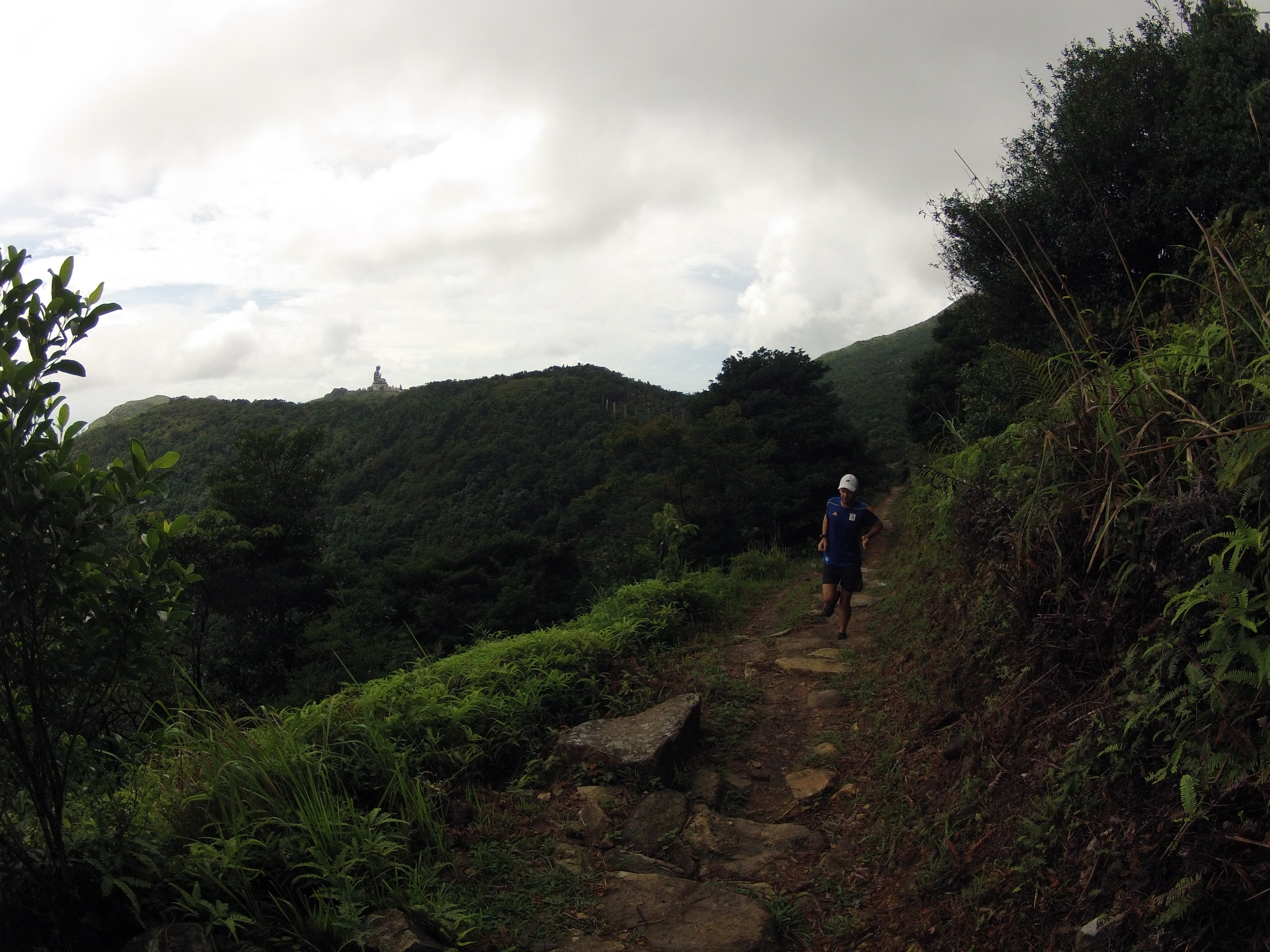 The run was quite a slog, with soggy, slippery surfaces underfoot. Much of the trail was either rock stair or hardpacked earth. There was a lot of water pouring down the mountain from earlier rain showers, making for very tricky footfalls and a constant threat of slipping. Unfortunately it was very misty when we were on the trail, so our views were limited. However, on our way back, we had a brief clearing to allow a magnificent view over the island with the giant Buddha floating peacefully on a lower hilltop. 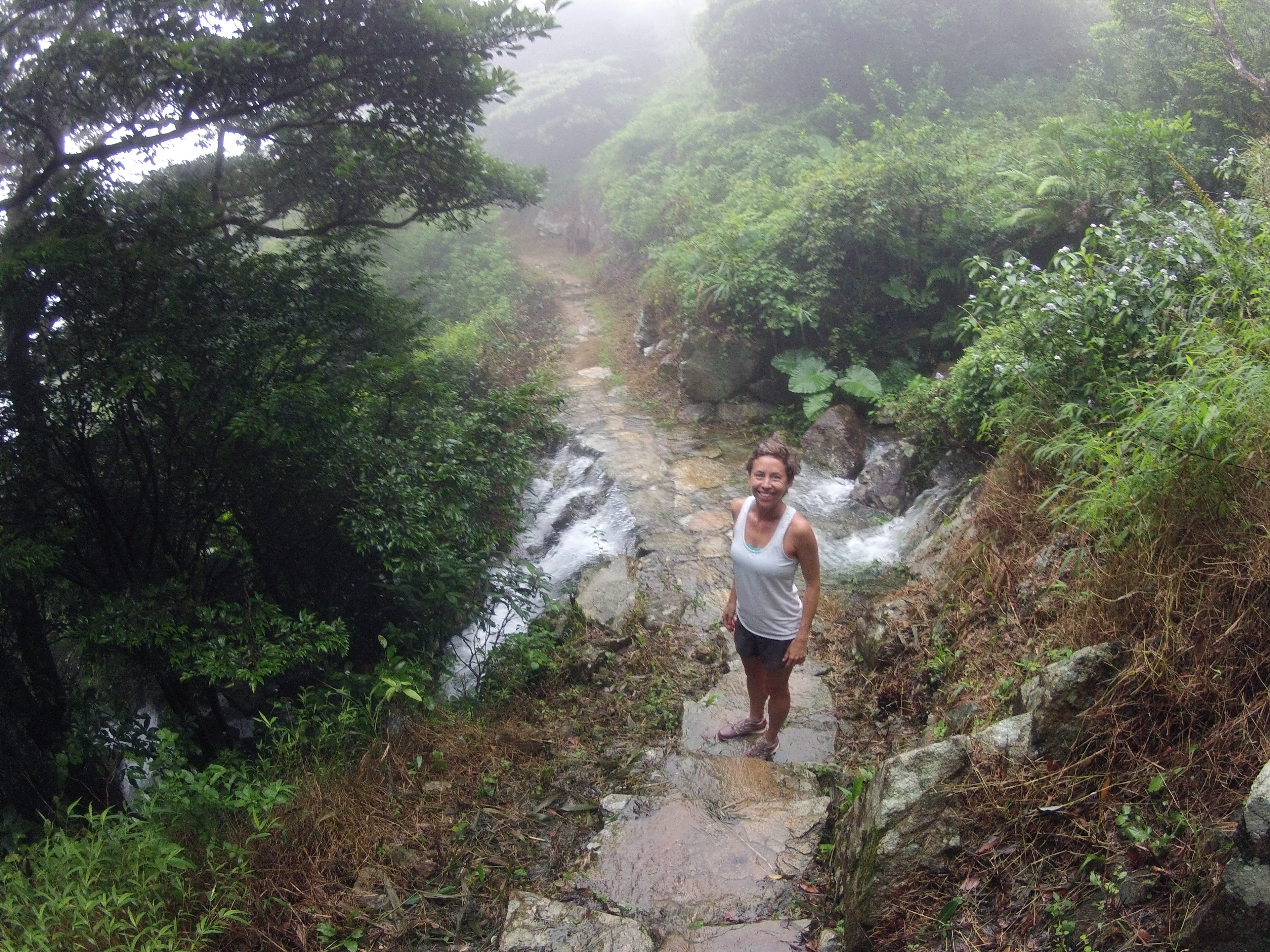 Lots of rain = lots of waterfalls on trails 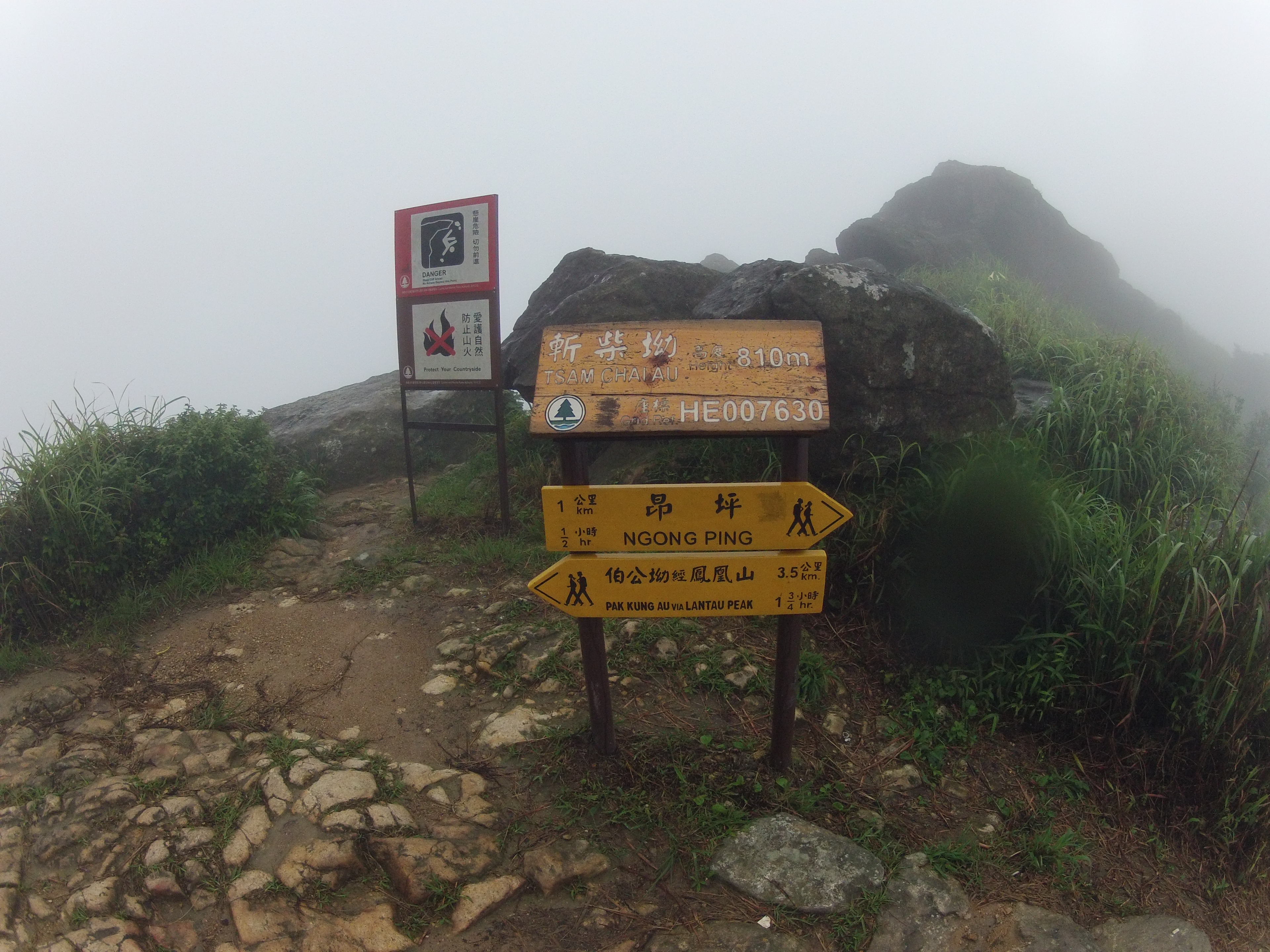 Bev at the top of Lantau Peak. Sadly no views this time!

We wrapped up our time on Lantau with lots of inside time due to the poor weather (which eventually became a cyclone warning!), a visit to the monastery and its amazing array of vegan food and baked goods, and a stairway sprint to get up close and personal with the big Buddha.

Hong Kong and Lantau Islands were an incredible introduction to what was previously a very mystical, unknown part of the world to us both. We were fortunate enough to meet a local trail runner while on one of our outings. He happened to have run the OCC-UTMB race with us in France last year. It was great to get his perspective on trail running in Hong Kong, and this encounter reminded us just how amazing the global trail running community is. We left with positive memories and a strong desire to return to uncover much more of this spectacular, surprising place.