On being a (vegan) runner

Four years ago I was already living a vegan lifestyle and I was out of shape. I didn’t eat anything that came from an animal, but I also didn’t necessarily concern myself with eating healthily. (It should be noted that Oreos and Coke make up two parts of a (bad) vegan diet). At 5’ 7” I was a rather podgy 158 pounds and I probably couldn’t run more than 1km without stopping.

In June 2009 it was time for a change. I decided to start running in order to lose some weight. Bev and I examined our diet and made some changes. We ditched the processed foods, the bread, the juice, the pop, the vegan pastries, the vegan dark chocolate – pretty much all refined sugar, and drastically reduced our coffee and black tea consumption. Six months later, I weighed 120 pounds and signed up for my first race – the 2010 BMO Vancouver Marathon, which takes place in May every year, and I started training with an actual race goal for the first time.

Fast forward four years. I now weigh between 118 and 120 pounds, have run six marathons, one 90K road ultra marathon (Comrades Marathon in 2011 in South Africa), one 80K mountain trail ultra (Arc’Teryx Squamish50 mile), one 50K mountain trail ultra (Chuckanut 50K), several half marathons, and many other shorter races. I don’t run them particularly fast, but I always finish, and I’m still improving. My current best marathon time is 4:02, which I hope to better at my seventh marathon, the Good Life Fitness Victoria Marathon on October 13th.

When I started running, I decided I needed to learn a little more about how my vegan diet would affect my ability to increase my activity levels. I learned that some of the world’s most impressive endurance athletes were actually vegan. I read about 100 mile trail running legend, Scott Jurek, and two-time Canadian 50K road running record holder and professional Ironman triathlete Brendan Brazier, who both credit their vegan diets with helping them achieve the sporting successes they did.

Two things were immediately obvious to me: I was doing the vegan thing wrong, and being vegan would not be detrimental to me increasing my activity levels.

I convinced Bev to start running too, well, actually I think she just noticed how much I was enjoying it and she started to take an interest in it and pretty soon Team Attfield started running together.

We continued our nutrition related reading and exploration of different eating approaches, going from very low carbohydrate based diets to where we are now, which is a pretty high carbohydrate diet – always vegan though. We even went through a period of eating almost entirely raw as well, and had a 10 month stint of consuming around 20 bananas per day!

Currently our diet consists of simple carbohydrates (lots and lots of fruits, especially bananas (not quite 20 per day anymore

), complex carbohydrates like yams, potatoes, quinoa, brown rice and quinoa pasta, all kinds of legumes and beans (which also provide some protein), fermented soy products including tofu and tempeh, and copious quantities of vegetables and salads.

A typical (non race-day) menu would look a little like this:

All blended together in our indispensable Vitamix blender. This shake tastes much better than it looks!

One serving of Vega One (vegan) nutritional shake.

Third mid morning snack (no, we’re not hobbits (even though we like them)):

Either a Clif Bar, an apple or a banana.

Lunch is typically left overs from the previous night’s dinner and usually consists of a bowl of miso and tofu and vegetable stirfry (broccoli, zuchini, celery, carrots, red peppers) on a bed of quinoa.

Usually two oranges and a grapefruit and an apple in the late afternoon.

As mentioned above, a typical dinner would be a large bowl of miso and tofu and vegetable stirfry. Other dinner options include rice and quinoa pasta with tofu crumbled in tomato sauce, or baked yams or potatoes with kidney beans and avocado. Soups and really large salads are also a frequent dinner time favorite in our house. 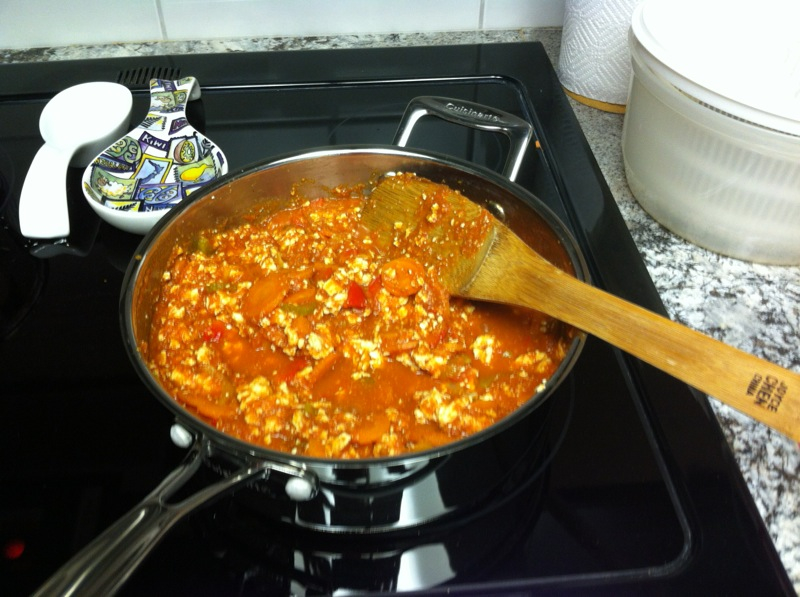 Depending on the amount of training we did during the day we would also typically include a protein shake consisting of Vega (vegan) Performance Protein, bananas, blueberries, carob powder, Udo’s Oil 3-6-9 Blend, and unsweetened soy milk.

The above menu keeps us well fuelled and energized for our day to day tasks and supports our 6-day-a-week running habit very well; it satisfies our tastebuds, and keeps us ridiculously regular (sorry for the overshare). A key finding for both Bev and me is that we don’t experience that very typical crash in the afternoon – our energy remains very constant and even throughout the day.

On racedays (and the day or two before) we change our breakfast and cut back a little on the very fiber rich fruits and vegetables in an effort to avoid the dreaded mid-race number-2 bathroom break! On these mornings we opt for the Bob’s Red Mill gluten free mighty tasty cereal or Whole Foods Organic 365 steel cut oats with soy milk. After a long day out on the trails or on the road, our guilty pleasure is usually some organic corn chips with guacamole and a rice and bean burrito.

We initially started down the vegan path because we didn’t feel right about the horrendous suffering inherent in the production of meat, dairy and eggs for food, and along the way we learned that being vegan is also the single best thing we can do in order to (substantially) reduce our environmental footprint. Combined with the fact that a large and growing body of scientific research shows that a well executed vegan diet is by far the healthiest way to eat makes being vegan an absolute no-brainer for us.

See you out on the trails, somewhere in the world

There are 4 comments. Add yours