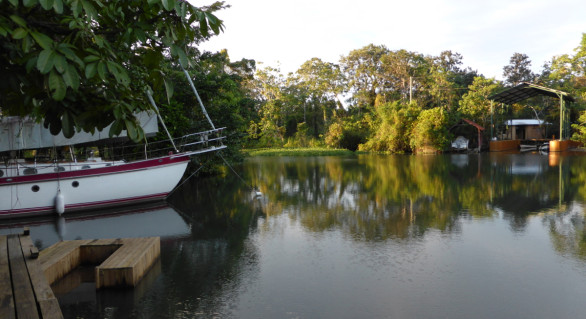 After 3+ weeks in Guatemala and so many amazing sights, sounds and experiences, it was time to move on to a new country. We travelled east (+/- 7 hours via shuttle bus through mountain villages and over bumpy roads) from Semuc Champey to Rio Dulce, a town on the banks of the River Dulce (hence Rio Dulce!). We spent the night at Hotel Kangaroo, a few minutes up the river by boat from the main town of Rio Dulce. Run by an ex-pat Aussie (obviously!) and his wife, the hostel is a great spot to touch down for a few days in a very tranquil environment – and it has a great little Mexican restaurant too! Unfortunately we only had one night there as we decided we needed to press on into Honduras. 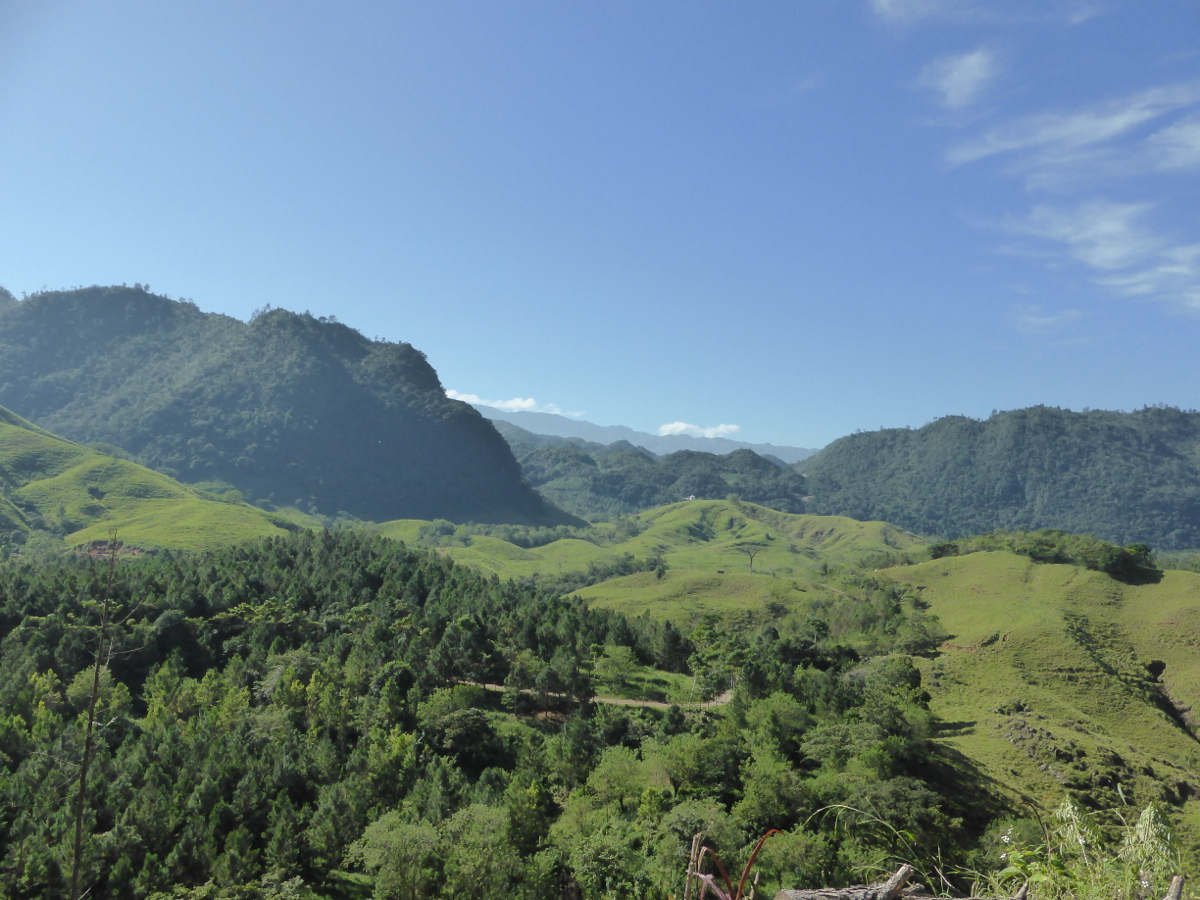 Lush hills in the countryside between Semuc Champey and Rio Dulce 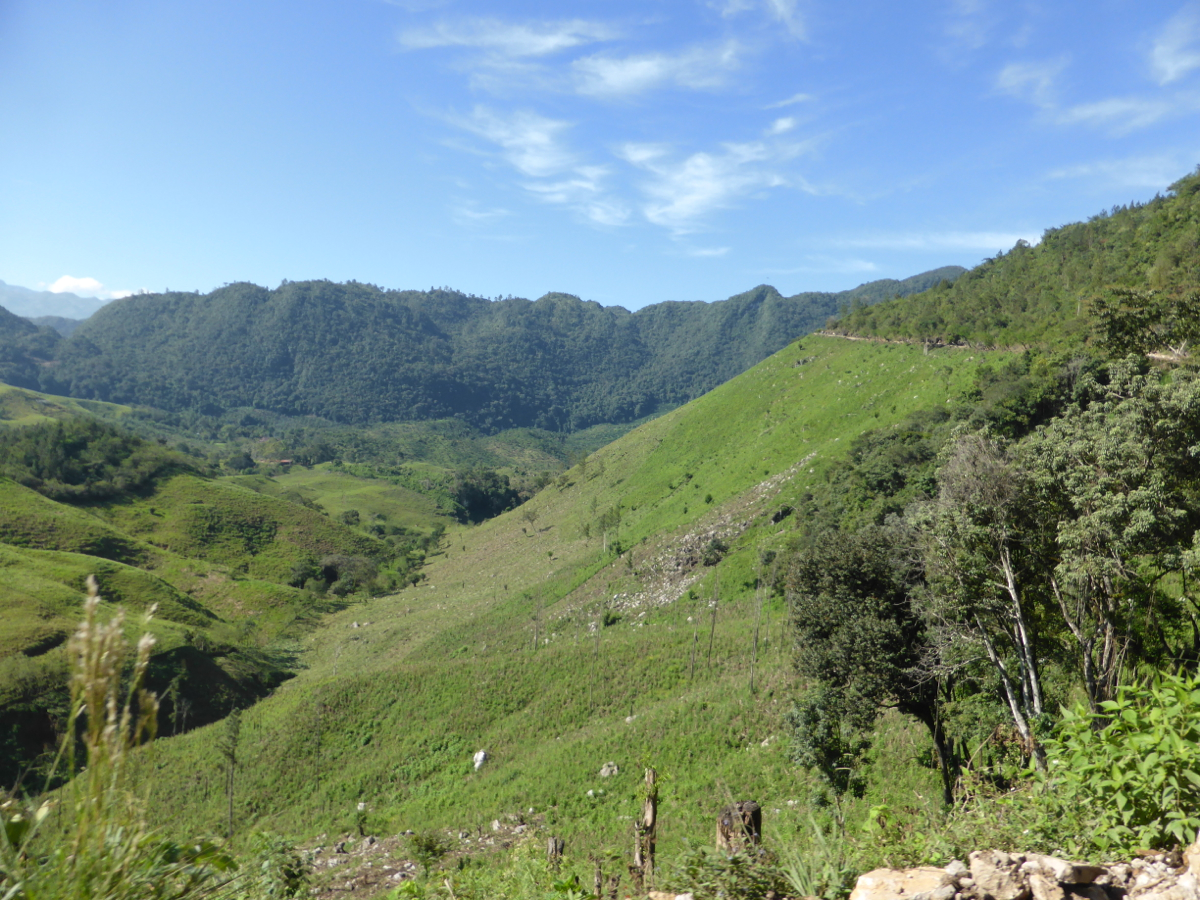 Another view of the gorgeous countryside! 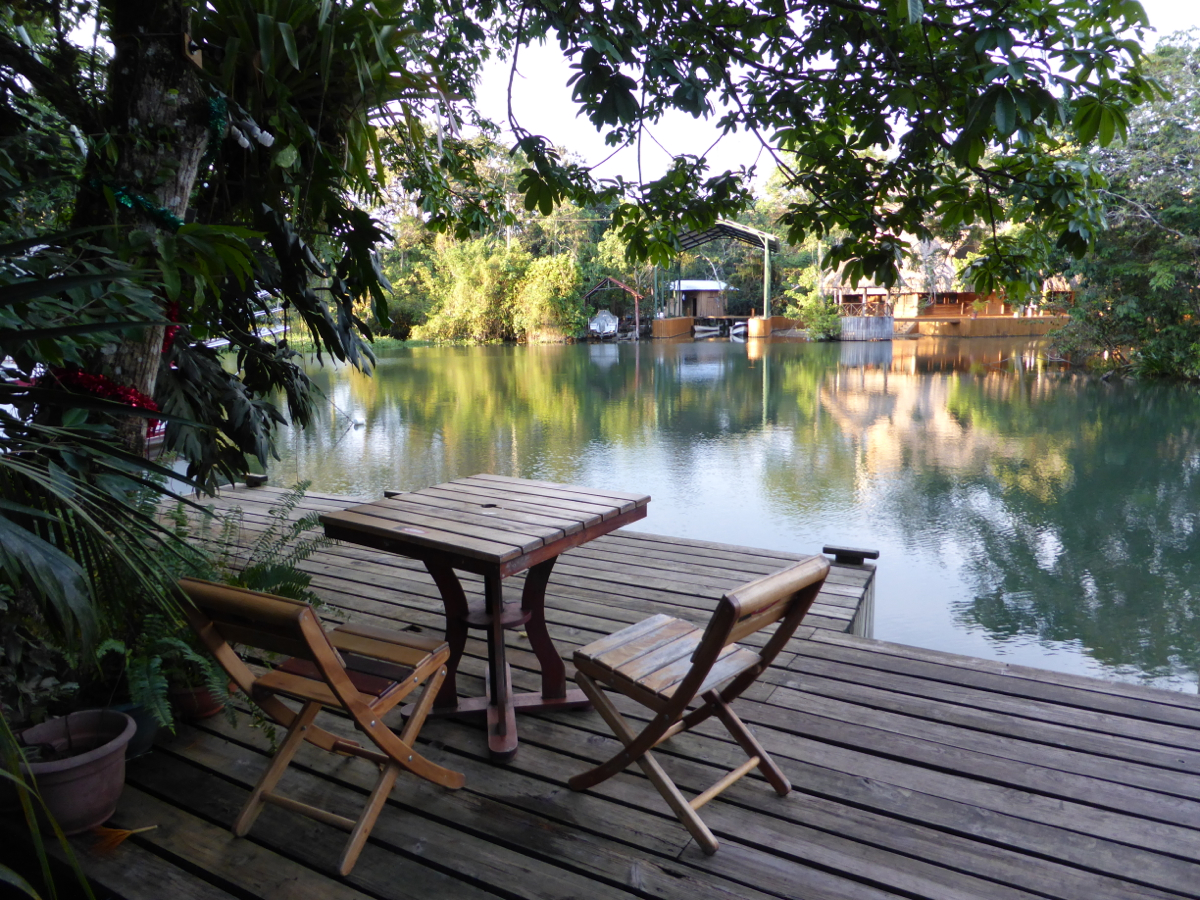 The deck at Hotel Kangaroo – perfect for a cold sundowner after a long travel day! 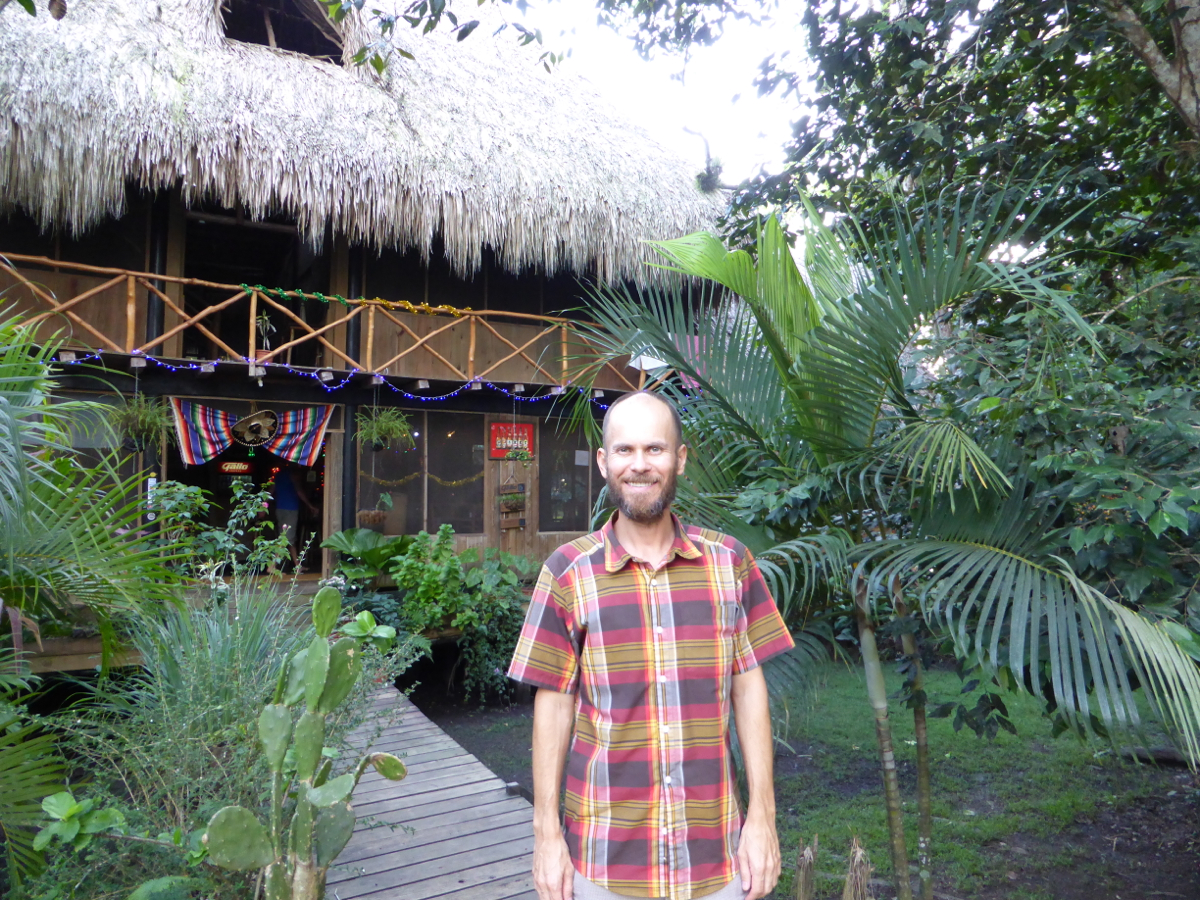 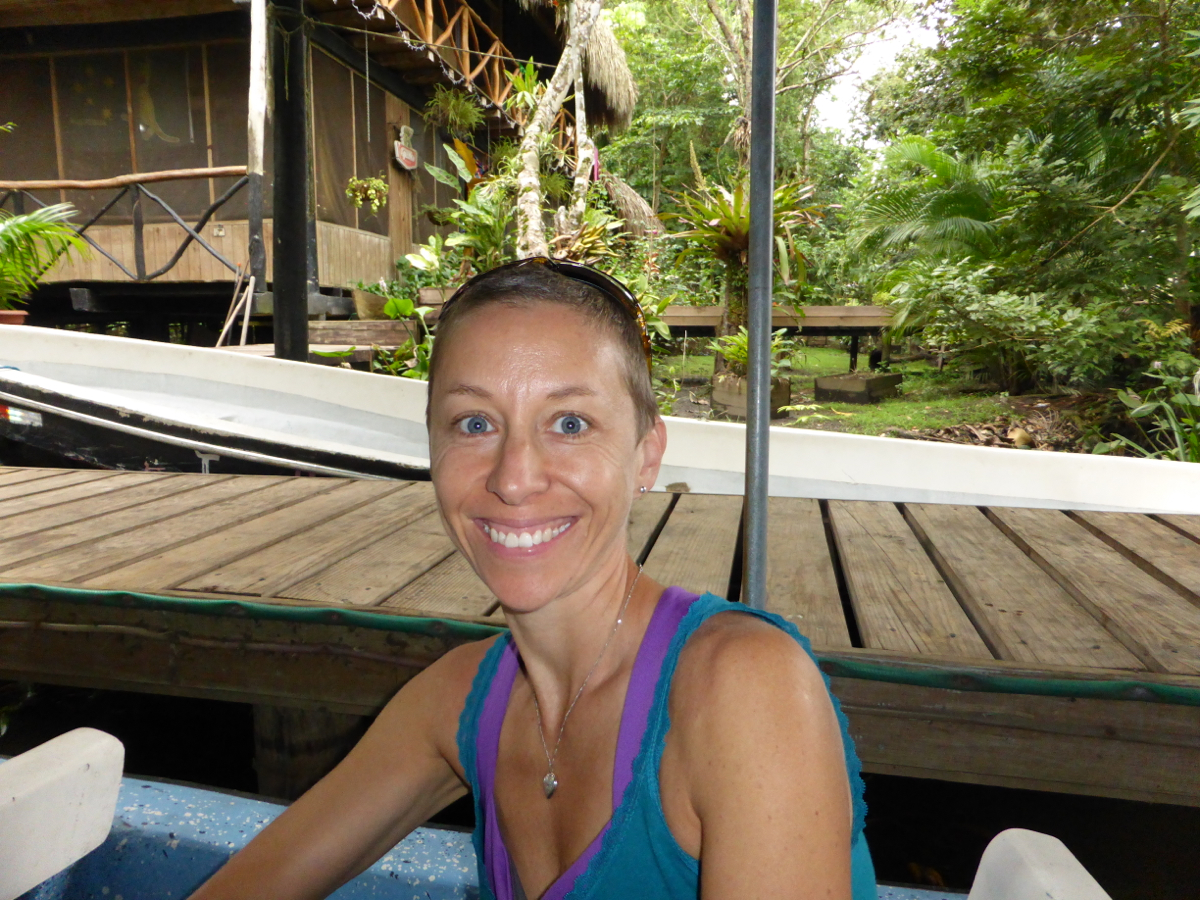 We departed Rio Dulce via local bus the next morning for the 220km / 7-hour journey to the border at El Florido, located between Chiquimula, Guatemala and Copán Ruinas, Honduras. The journey started off with images of a comfortable coach style bus on which we would while away the time sleeping, reading and writing blog articles. Unfortunately, when the bus arrived, it was clear that the conditions would be slightly different! The somewhat rickety bus was completely packed with people and packages in all shapes and sizes (including a goose in a box). After paying our fare of roughly $6 each (Richard tried to negotiate a lower fare as we clearly were not going to have a seat for the full journey, but the conductor was not interested!), we stood for the first hour, after which I was able to find a seat. At some point Richard was offered a rickety stool to sit on in the aisle next to the driver by the conductor! Can’t imagine this scenario playing out in Canada! 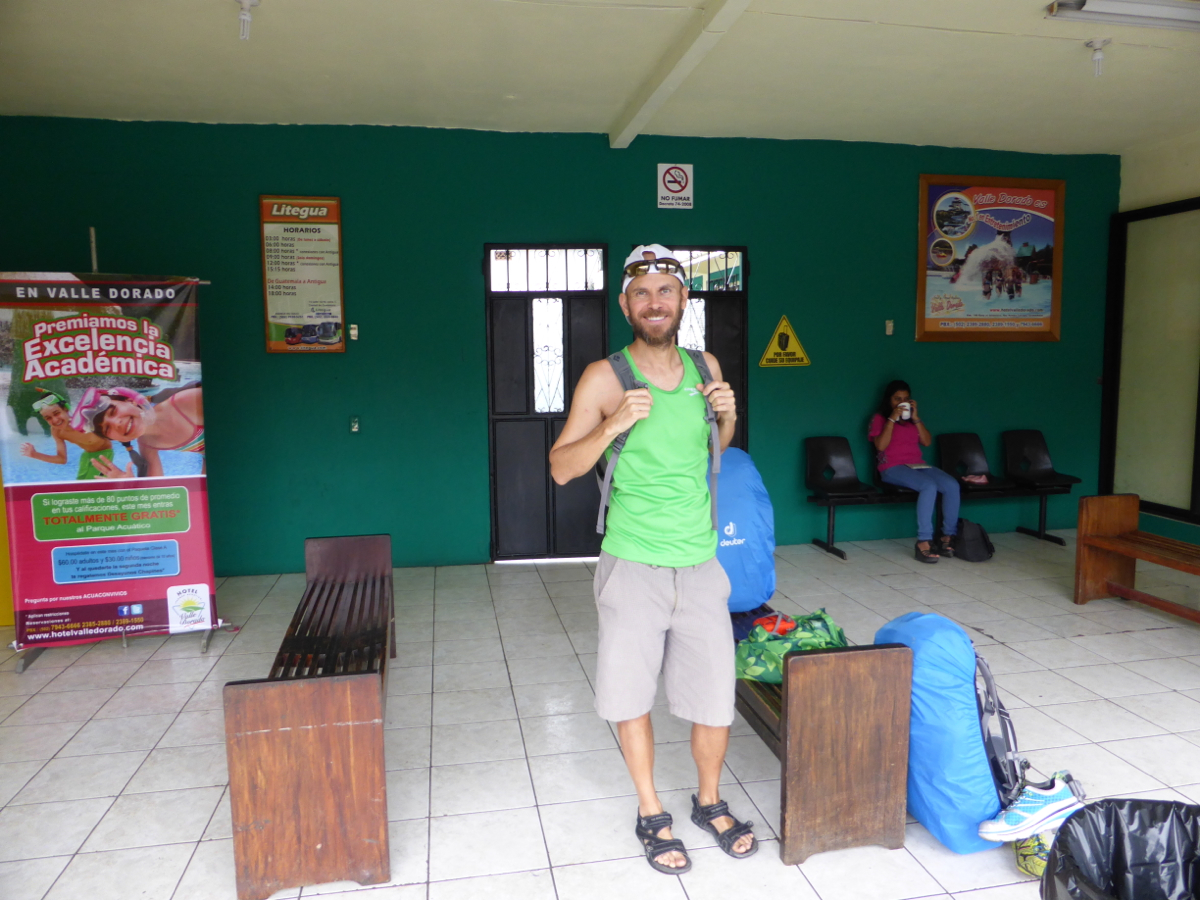 Waiting for the bus in Rio Dulce 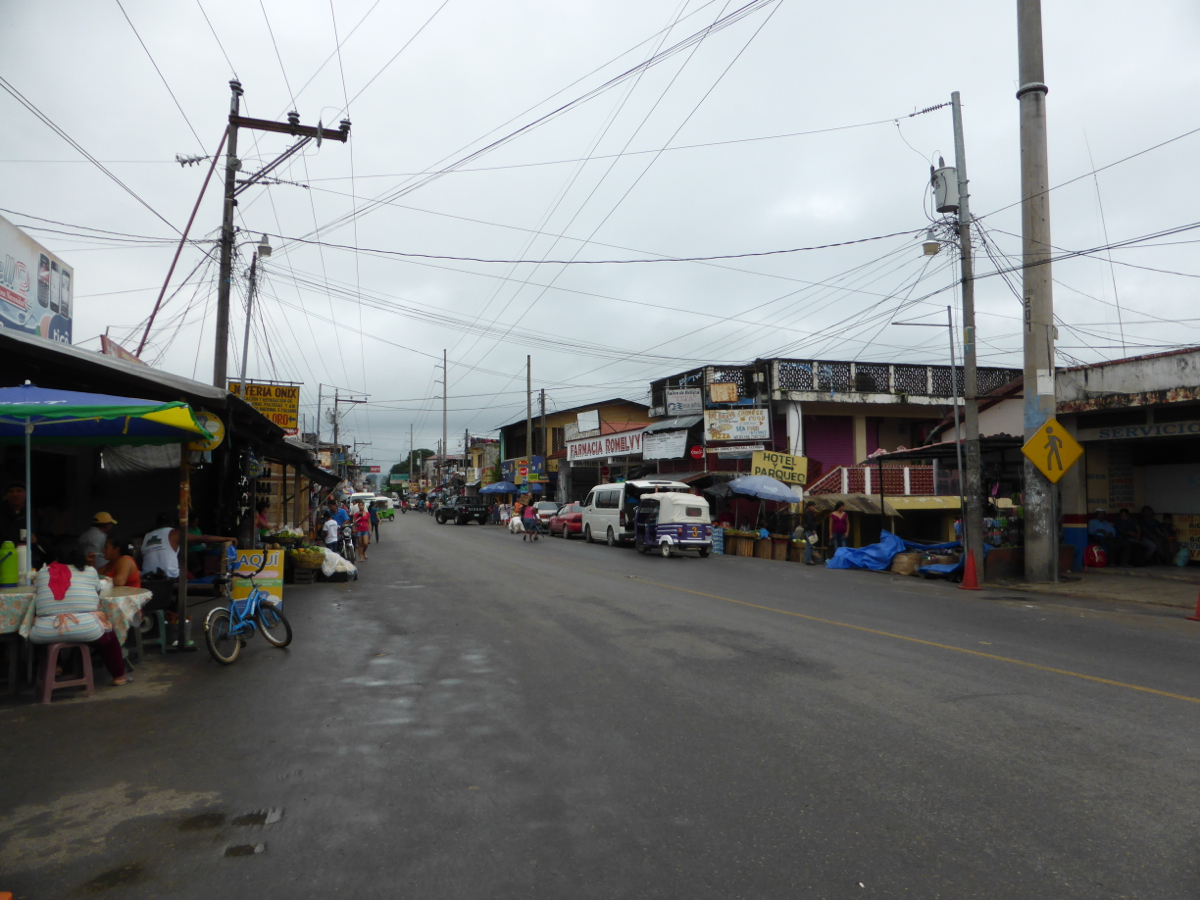 Eventually the passenger volume thinned and we were both able to sit comfortably for the balance of the journey. As is the case with bus travel in Central America, the trip was not without incident, as one of the tires was perpetually deflating, requiring the conductor to stop and jump out of the bus every 40 minutes or so to plug the leak with a nail. This went on for at least 5 hours, after which the bus pulled into the bus company repair shop to have the tire changed. As the day went on, the bus emptied but for the two of us, and we were eventually unceremoniously dropped at the “frontera” or border, after what ended up being a 9-hour trip instead of 7! We were pleased that another of our long travel days by bus in Central America had ended without loss of limb, sanity or personal belongings

After each paying our unofficial US$3 “entry tax” upon arrival in Guatemala, we wondered if we’d receive the same request upon departure from the country. Our host at the Kangaroo Hotel indicated that we shouldn’t have to pay a “departure tax”, but our border official had other ideas. This time however, we decided to stand our ground, and asked what the tax was for, and if we could have a receipt – all in Spanish (well done, Rich!). Notwithstanding our basic Spanish, these were not easy questions to ask a stubborn (and we assume, corrupt) border official who has your passports in her hands! Anyhow, after a few minutes of staring at one another, she eventually relented, and waved us through.

Entering Honduras was very easy and less intimidating than we both expected. After paying our official entry fee of US$3 at the border crossing, we hopped in a shuttle bus for a short 10km drive to the town of Copan Ruinas, our base for the next 3 nights. Once again we parted with our bags as they were thrown onto the roof of the minivan – something you get used to very quickly when travelling by local bus in Central America. Most times the bags are tied down and covered with a tarp, but there have been some moments when we’ve wondered what shape our bags would be in upon arrival at our destination – assuming of course they made it that far! More on our short stay in Honduras in the next blog post!